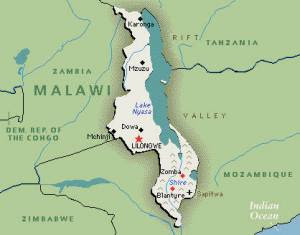 Ex-First Minister Jack McConnell set up the Scotland-Malawi Partnership because there have been strong civil society links between the two countries for more than 150 years and he recognised there are a number of Scottish individuals and organisations with kinks to Malawi and a need to coordinate these in order to improve effectiveness and avoid duplication in effort.  This began with David Livingstone's journey to Malawi in 1859 and has continued to grow.

However, members of parliament in Malawi have criticised British and Scottish MPs for meddling in their affairs.  The Africa News reports:

'The western law makers, particularly the Scots, continue to discuss and criticise Malawi for the arrest of gay couple Steve Monjeza and Tiwonge Chimbalanga.


Kondwani Nankuluma of the Legal Affairs committee of parliament said it was wrong for the Scottish MPs to meddle in Malawi's business.


"We are following our laws and proceeding with the case for the two in the courts.  They have no part in this business as we have laws and we are following it.  Why do they keep pestering us to release the two?" he said.'

Fiona Hyslop, the External Affairs Minister of the Scottish Parliament, is undertaking a visit to Malawi next week to see the impact of Scottish Government funded development projects at first hand.

Why do we have this desire to insist all other countries must have the same laws as us? Scotland has no right to harass any country.  Giving aid to a country does not give us the right to tell them how to govern.

We would be much better respecting the laws of Malawi but gently reminding them that we don't approve of gay people being persecuted for their sexuality. That is the best we can do without causing offence.
Tweet
Posted by subrosa at 08:40

"Why do we have this desire to insist all other countries must have the same laws as us?"

He who pays the piper...

Sometimes it is necessary to cause offense. Though having said that, I doubt this is the right way. My instinct would be to give the money back to Scots/Brits and let them decide how offensive the aid agencies they donate to would be best.

IPP, the Scots wouldn't be telling the Saudis what to do would they?

No, it's bad manners and inappropriate to behave badly or as the article indicates.

“Why do we have this desire to insist all other countries must have the same laws as us?”

This is very much a grey area. Should we have kept our opinions to ourselves during the Apartheid era in South Africa?

When it comes down to human rights, I think we have a duty to say what we like. I just wish we would say more about the treatment of women by our so-called friends in Saudi.

Render unto Ceaser that which is Ceaser's.

Then maybe one day, as the new generations step forward, they will recognise that our values can also be theirs.

Mind you, that last para might be the biggest load of colonial guff I've every written (and you've read)and the Malawians might take a look at us and say who wants to be like them!

But para two is the key - quiet unasumming help over time.

That's it Dram, that's the way to do it. Not by harassing people.

Some of our laws are a disgrace. Why would others want them?

SR - I'm afraid there are a few details I can't work out from the brief article on this but...

"We would be much better respecting the laws of Malawi but gently reminding them that we don't approve of gay people being persecuted for their sexuality."

It doesn't appear that MSPs have done anything more than criticise the laws - laws which do appear quite inhumane. I don't know whether the couple are being hauled before a court for a private, consenting sex act or for a private, consenting sham fantasy mock-marriage, but either way it seems barbaric and quite right for those who value liberty and personal choice to criticise.

Perhaps the couple lied on official documents or defrauded someone somehow, which should be punished. But (without having researched it) it doesn't appear that they've done anything like that...

IPP, you've just stated my point ' laws which do appear quite inhumane'. Other cultures don't see certain issues that way.

Who are we to actually harass other countries just because we don't agree with their laws? There are further comments from Malawian politicians around which say they're being criticised.

Nobody changes other countries laws in this manner. The reaction we see now is what you get when you try the 'heavy handed' technique.

All we can do is show by example.

I'm getting really weary of western countries who think they can inflict change upon other countries by what I think is a form of force.

Isn't it strange that Saudi Arabia, which has some of the most inhumane laws in the world according to western cultures, is never targeted in this way? I wonder why. No, I know why.

SR - I am in no doubt that cultures which see persecution of individuals for private, consenting choices made between grown-ups as acceptable are backward and inferior to ours, at least in that respect.

I'm not really sure how the MSPs' comments came about, but as long as they're not going out of their way to make an issue of this, when their job is law-making and governance in Scotland, then I'd say it's quite legitimate to criticise. But politicians are expected to comment on all sorts of things outside their jurisdiction and I don't see it as bad that they might make a comment.

As far as I can make out, the 'harrassment' is simply criticism. Having said all that, I agree that it won't make much difference. I'm sure it'll rub some people up the wrong way, but equally international pressure gives support and reassurance to others. So little net effect, I'd guess.

Saudi Arabia - three reasons: 1) They're richer and more important. 2) We buy a tons of oil from them (but they need our money more than we need their oil so I don't understand why this bothers us). 3) They're muslims, and we are always cowardly towards anything with a hint of islam.

IPP I don't know enough really about this matter to say more really, but it would appear, from the article, that the accused deliberately flaunted the law.

Harassment, criticism, bullying, call it what we will. Comment is fine but surely we (the Scots) should look closely at our 'comment' when we're accused by a country's elected representatives of sticking our noses into their business?

Aye that's the reasons Saudi are never criticised. Strange how we feel the poorer countries can be bullied.

Just to clarify - although this particular case is about gays, it could be about any legislation in the country, be it education, health etc.

Scotland donates towards certain Malawian projects but that doesn't give us the right to expect them to adopt our values. Change is never healthy forced in that manner. Iraq is an example of that.

It should also be pointed out that it wasn't too long ago, in this country, that homosexuals were jailed. Fair enough, we have moved on from there but we should encourage change; not demand it.