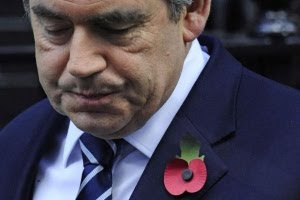 This was sent to me by one of my loyal readers who wishes to remain anonymous. It's a snippet about Brown in his student days - an interesting one though and his PhD was in history, concentrating on the Labour socialist movement. This too will give you a little more insight to our PM's thought processes back then.

I first came across Gordon Brown in my first year at Edinburgh University. I did not have much interest in student politics and this was one of the few political meetings I attended in seven years at University!

It would be late 1972. Brown was standing as Rector of the University against a fellow called Sir Fred Catherwood who had been director general of the CBI I think. At the time Brown was already a heid bummer in student politics and his views were fiercely left wing. His flatmate Jonathan Wills had already been the first student rector but was giving up as he was leaving the University.

It was a crowded meeting in the Union at Teviot Row, with both candidates and their seconders due to speak. When the candidates were announced Brown got a great applause. Sir Fred’s seconder was introduced as a Ph. D. student. Brown supporters rubbished him by shouting ‘intellectual’ which struck me at the time as a strange insult to throw within a University!

It only struck me recently that Brown was ALSO a Ph.D. student at this point but he kept quiet about when preparing his candidature. So even then he was spinning for all he was worth. This is the Ph.D. that he has airbrushed out of his CV. No mention in his biography at 10 Downing Street website.

What exactly was the subject of Gordon's thesis? Someone ought to put a copy of this online for us all to have a look at.

When I first came across GB, a whean of moons ago, a question popped into my wee, NON PHd head, would I buy a second hand carfrom that man? Answer no. In word, deed and manner he came over as oily and shallow. "Up the workers" when in fact he'd never worked in his puff. He was a conman then and is still one now. That's my opnion anyway

The subject is the Labour socialist movement as far as I can gather Demetrius. Very hard to find out anything about it online.

He might know a lot about 'movements' but bugger all about management.

Hello Dram, good to see you. I think you can safely say your opinion is shared by many (millions).

I think it was something like 'Labour Party in Scotland to 1926' or something. Majored on John Maxton who Brown later wrote a book on I think.

Edinburgh University will hold a copy in University Library which it should be possible to view?

He also runs a PR spin on his eyesight history. Born with it and if he was playing rugby, which I doubt, he was stupid to be doing so. The man is awash with inferiority complexes from the dislike felt by his dad towards him.

Thanks for that Strathturret. I can hear keyboards being bashed as I type. :)

'the dislike felt by his dad towards him.'

We can't choose our parents or our children - not yet anyway - and it's sad of course, when a parent takes against a child - you hope parents will be bigger than that. But then again, you can't help feeling that if Brown senior disliked his son he was just being honest and discerning. Children have their own personalities and some children are very hard to take to.

I believe the PhD is "Labour Party and political change in Scotland, 1918-1929 : the politics of five elections / Gordon Brown."

Stops just before the Great Depression...

Bugger. The link should have been this one.

I realise I'm blowing my cover (sorry SR) but another snippet caught my eye as I looked at the University archives, available on line.

There is a bit from the Student newspaper that Brown is pleased that he has persuaded other potential candidate who had stood in the previous years rectorial contest to stand down in favour of him. These include the satirist Willie Rushton and John P Macintosh, who was a very fine Labour politician, academic and Scotsman columnist who sadly died far too young.

Now does that sound like a familiar Brown tactic?

I can at least remove doubts about his sexuality, as we have an ex-girlfriend in common. She knew him in his student days. When I asked about him she said he was a stuffed shirt, even back then.

'I can at least remove doubts about his sexuality.'

I've know of others who can put them back again. It only matters because of the lie, the sham. Few would care if he were honest.

Back in our day Jim many fathers found it difficult to relate to their sons. It seems to have improved nowadays or perhaps fathers have just learned to hide it better.

Gareth, thank you so much for the link. Much appreciated.

And the second link Gareth. :)

Strathturret, no problem about blowing your cover, it's your story after all. I'm more than happy for you to claim it and I'll be very happy to re-edit it and put your name on it.

Well Vronsky, I know someone who met him on the university social scene and he was never comfortable in female company. In fact he was a bit of a loner and kept detached from the fun at any party.

If you can't relate you can't relate. there's no way around it - it's either there or it isn't - it's animal. However hard you try the gulf will show and in any case it's two-way.

I understand that Jim. In fact was just reading something about it in a paper the other day - wish I could remember which one.

Thats OK Rosy. I've heard it all. Line of work and that.

Now, O/T but affy good programme on Orson Welles the other week, written and narrated by Simon Callow. Did you see it? You were in it. You told me my future is all used up...

I disagree, most vehemently, btw.

This is dynamite Sb! Loved it. I'm actually (still) reading Gordon Brown:PM by Tom Bower and there's stuff in there that'd make your hair curl. I intend to whore that link, if you don't mind. I think it needs to be 'put out there' :-)

Jim I didn't see that programme, but will have a look and see if it's around on the net somewhere.

I would never say your future is all used up, you're wicked so you are! If it is are you intending to return to your past and relive it?

My guess is that you've a long time to go yet, maybe longer than you'd like. ;)

TT, you're a brave woman to read that. Is it any good?

Please feel free to help yourself to anything here. You know you're more than welcome.

Subrosa, this is a GREAT expose. Brown has been a horrid parasite from WAY back, I loathe him even more now. Who would show up to a college drinking party with BRICKs in his bag...what a JERK.

I hope you all get rid of him very, very soon...maybe the iraq inquire will be his death knell

He'll do his usual bluff and bluster at the Iraq inquiry I should think Bunni but we all recognise it these days thank goodness.