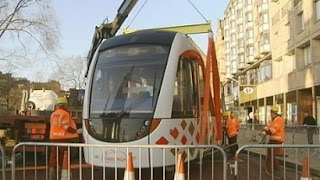 As I live quite far north of Edinburgh I only visit the city on the odd occasion but the trams fiasco does interest me.
For those of you who don't know, the Scottish Parliament decided Edinburgh did need trams to make a permanent scar across its distinct landscape but only the SNP government voted against it. John Swinney said he would fund it as proposed but the government would not provide a penny more than the quotation.
Edinburgh, like many Scottish cities, had trams until the 1960s when they were thought unsightly and unflexible with the growth of cars.
I'm sure Calum Cashley (he has excellent knowledge of this matter), will post on this in much more detail, but there have been regular disputes between TIE, the council-owned company overseeing the project and the contractors. One of the most crucial disputes has involved an independent arbiter. The issue was the £5m additional cost of building a retaining wall which required stronger foundations than originally planned for.
It is feared the ruling, which has seen the contractors BSC awarded 90% of the costs it originally claimed, will have a knock-on efect for the hundreds of points of dispute between TIE and the consortium, estimated to be worth up to £80m.
Shirley-Anne Somerville, the SNp Lothians MSP, sald :"This is very concerning. TIE have assured everyone that the reason they were taking matters to official dispute was that they were confident they would win their dispute with the contractor.
"If we are seeing the contractor substantially winning this dispute, it does not bode well for what happens with the other disputes that are outstanding."
John Carson, a former head of maintenance at Network Rail and a long-stading critic of the trams said: "... The ground conditions at Russell Road are not what they expected to find but they could have found out that there was a lot of sand and silt in the ground by looking at records kept by the Scottish Geological Society."
As previously stated, the Scottish government refuse to put any more cash towards the project so who is going to pay the extra required? I can see council tax in Edinburgh having to rise in an attempt to claw some extra funding. Surely Edinburgers won't mind because after all they'll have their much demanded shiny trams eventually and be happy to pay for them for a good few years.
Source
Tweet
Posted by subrosa at 16:23

I have mixed feeling about the trams.

Pleased that the SNP called it right about this project which goes from disaster to disaster.

On the other hand when its finished and the Edinburgh council tax payers are paying for it I'm sure it will be grand and I look forward to using it as I visit Edinburgh often.

Calum Cashley has pointed out before that bus prices will need to rise to pay for the tram. The buses are currently profitable but the tram will cannablise their best routes!

You have to commute to or from Edinburgh to really appreciate the tram upheaval Rosa...
The utter hatred it has engendered amongst the traders on Leith Walk(apart from those who sell bacon rolls to the fluorescent army of workers)...
Knowing that the hole which was filled in last week, will be dug up again a couple of feet to the left next week...
The cyclists who WILL get their wheels jammed in the rails...not to mention heels...
And there is no end in sight...

I'm not in Edinburgh much Strathturret but I think these trams will quickly become blights on the landscape and the public transport facilities in a city which already has excellent transport.

Conan, I'm sure you know I've been avoiding the centre of Edinburgh like the plague since early last year. I couldn't believe the upheaval and that was before they started on Princes Street.

This project is going to go way over budget with the poor management and who will pay? You poor folks of Edinburgh because I'll go to Glasgow.

Just as England is London-centric, Scotland is confirming its Edinburgh-centric position.

Perhaps the pressure (and vanity) should be taken off Edinburgh by moving the seat of Government to Perth, Blairgowrie or Hawick. Therebye helping to bring industry and employment while creating a second chance to build a parlaiment that isn't an architectural nightmare.

err and what we do with the one we've just built at huge cost. Idiot!

Now now Strathturret, I'm sure one of the banks would buy it if the price is right. :)

I've always thought Stirling should have the Parliament. The other places are too small and I doubt would enjoy the price of property increasing.

I live in Edinburgh, found this article late on - November 2010 as I write this- and the leader of the trams project has just resigned.
This project is a burden on the city and the people of Edinburgh. Even if it ever worked, it would be irreverent to 95% of the city's residents who don't happen to live along the route. The line to Leith has even been cut from the initial line, even if that ever opens.
We have endured over three years of orange plastic bollards, pedestrian and traffic chaos, flying grit, cracked tenement buildings, and construction noise for a glorified replacement to our 22 bus route.
My daughter returned home from school the other day with a broken plastic folder; they were given at the beginning of term. Her headteacher says there is no budget for a replacement one.
We are cutting back on housing, leisure, recreation, yet this project is swallowing money hand-over-fist.
It all stems from a project that was signed off on the day before the last council election, in a fanfare of PR and without proper consultation.

Edinburgh does not need a tram. the street capacity at the centre is more than enough to accomodate the routine traffic. It is the trafic light scheduling that causes the congestion. Has ANYONE noticed for how long the red lights stay on in fron of the Balmoral Hotel and similar places? I once witnessed a power failure around 18:00 (top peak time), which disabled all the trafic lights along Norht Bridge-Nicolson street(and further)...the traffic moved. It was diffused to a point that the streets were almost empty(yes! at peak time on a week day). That would be impossible if there wasn't enought street capacity to accomodate the traffic at peak time.
At the risk of sounding like a conspiracy theorist...I will go as far as saying that:
It's the city council (or some clever guys in there) that are causing the traffic in the centre in order to justify a certain number of bilions to "solve" the problem.