Scottish Power in with a Shout for CCS Funding 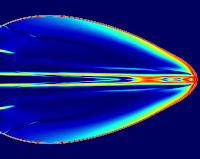 The main topic of discussion on Newsnicht last night was how Scotland was going to provide power without nuclear. The tory MSP's information was out of date if today's Scotsman is to be believed.
'Boost to Scots bid for £1bn emissions cash as rival quits race' says the paper.
Most Scots knew that Scottish Power were up against E.ON in the bid for funding to capture emissions from power stations but E.ON has admitted it can't meet the competition deadline which demanded a full-scale working demonstration plant built by 2014. Although E.ON has been allowed to remain in the competition (no explanation given*), some experts say this makes Scottish Power the front runner for the cash.
If Scottish Power won the money to retrofit Longannet Power Station, it could pave the way for Scotland to lead the way globally in developing a technology crucial for the fight against climate change.
If CCS is developed successfully, it will be able to capture about 90% of the emission produced by coal-fired power stations. Nick Horler, Scottish Power's CEO, said : The Scottish Power consortium is ready to demonstrate CCS at a commercial scale at Longannet from 2014 ...".
Let's not get too optimistic here, but it would seem Scotland's in with a good chance to progress this revolutionary technology. Many say jobs will be lost because we refuse to build new nuclear power stations and that may be true, but CCS will attract many of those skilled workers from the nuclear industry.
* my insertion
Source
Tweet
Posted by subrosa at 09:13

This is the foil to those who question whether sending a strong body of SNP MPs to Westminster does any good.

I say it does because it concentrates the minds of those making these decisions. Fairfields Govan would not now exist were it not for the rising power of the SNP.

Scotland does well when the SNP does well, the evidence is there in the history of politics.

If the SNP are weakened in the elections this carbon capture will be lost to us. Scotland has to be maintained weak divided dependent unconfident and subserviant by the unionist cabal, it is the only way the union can function.

It is the only way to get at our wealth. Which is why our kids are dying in foreign fields. To get at their wealth.

Sorry. "It is the only way to get at our wealth. Which is why our kids are dying in foreign fields. To get at their wealth."

Should have read."To get at the wealth of other nations." Or "projecting British interests abroad."

Entirely agree the country seems a more positive place when the SNP are doing well KBW.