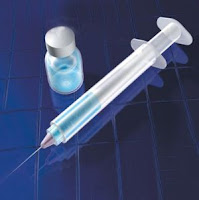 It would appear the Polish Prime Minister has respect for the health and safety of his countrymen and women.
Polish Prime Minister Donald Tusk says his government won't buy vaccines for swine flu which have not been properly tested or from producers who won't take responsibility for possible side effects.
He told reporters that vaccine producers were pressuring governments to buy, but were also demanding that all responsibility and compensation for possible side effects should fall upon governments purchasing the medicine.
He stressed that the few dozen swine flu cases in Poland had been mild and no deaths have been reported.
I should think since he made his remarks on Friday, there have been more than a few phone calls from Brussels telling him he was bang out of order. Heads of government shouldn't tell the people the truth should they? The truth in this case could cost their friends, in the pharmaceutical industry, big money.
Source
Tweet
Posted by subrosa at 17:50

yes, you just have to follow the money to see where the real pressure is coming from.
I'm one of those who's prepared to take their chances and not have the vaccine, I'm not alone in this either.

I'm another QM so you're definitely not alone.

Good grief , a Prime Minister with a spine.

I wonder what it is like living in a country with one ?

Good on the Polish PM. I too am a vaccine refusenik, though not through worrying about any side-effects. I would just rather have a functioning immune system. We need a healthy dose of illness now and again to stave off further illnesses.

I don't even feel like I'm taking a chance.

Bird-flu though scares the shit out of me!

I think I can identify your problem Sophia. You're worried you'll begin to become too chirpy :)

Same with Finland, Subrosa. They downgraded the 'threat' on the very day that Obama declared a state of emergency. Ridiculous.

The stand these small countries are making should make pepole take notice and ask what's wrong with the picture.

Interestingly, Lansley (Tory, Health) is pushing for the vaccine to be rolled out in schools. Hmmm.

For waverers, make your own vaccine!

Despite my misgivings I am not in a position to refuse the jab – so come Friday, it’s the H1N1 for me.

"He told reporters that vaccine producers were pressuring governments to buy, but were also demanding that all responsibility and compensation for possible side effects should fall upon governments purchasing the medicine."

Remind me how Lord Drayson made his millions?

I forgot Lansley had done that Fausty. Thanks for jogging my memory. Rather sinister decision.

Auch John you'll be fine. Now write a daily post telling us that won't you?

You don't need me to remind you where he made his pile, surely OR!

Mmm I wouldn't take the shot.
Watch this nuns story. Put up with the subtitles as it's good.

Ah guinness, a Canadian friend sent that to me a wee while ago. It was so informative and she certainly knows her subject I would say.

Hi SR
At last a leader of a country not stricken by the "Chicken Little Syndrome". And prepared to stand up to the bullies.
How long,I wonder, before OUR "leaders" recover from this syndrome.
I'm just reminded of an American blog I read some months back. Said that a vaccine for swine flu was patented 10 months BEFORE the disease appeared in the "wild"!
Cant provide a link because my hard drive crashed not long after and I lost the lot.

Number of H1N1 Swine Flu Pandemy cases grows (already more than 30,000 deaths worldwide) and you or one of your family could have this fatal disease. If you want to protect yourself and your family, friends, colleagues -
only Tamiflu is effective now.
Please, send this to all who you know, stop Swine Flu H1N1 epidemy now. Tamiflu (Roche) is an antiviral medication for flu prevention and treatment in adults and children aged 1 year and older.
Tamiflu is recommended for the treatment and/or prevention of infection with swine influenza viruses.

Doctor Eva you're obviously an employee of Tamiflu producers.

Tamiflu is NOT recommended by anyone other than its manufacturers. My GP cannot offer me the benefits.

So I do hope all the people you try to spam aren't taken in with your crap.

Doktor Eva, "and you or one of your family could have this fatal disease" - as a scientist may I request a citation, please? In himan language, will you provide a link to a reliable source that would talk of the actual risk that may happen?