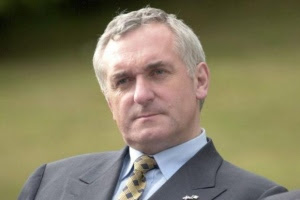 Bertie Ahern, the former Irish taoiseach, was quoted in the Times earlier this month as warning Scots than voting for independence could saddle future generations with debt and claimed it was unlikely to happen for a generation. At least he admits it is likely to happen.
Jason Allardyce is the writer of the Times article and I have found Mr Allardyce's articles to be reasonably accurate in the past although he is certainly not a supporter of Scottish independence.
You can well imagine what the First Minister thought of Mr Ahern's reported comments, particularly as the SNP has cited Ireland as a model for an independent Scotland many times.
But our First Minister isn't one full of hot air, he's a man of action and off flew a communication to Mr Ahern, the basic message possibly being, "what the hell are you playing at Bertie?"
The Herald now publishes Mr Ahern's response to the FM's correspondence. Here's a wee bit of it:

Mr Ahern said comments made during an interview had been sensationalised and left open to misinterpretation and he was disappointed that he had been portrayed as opposing Scottish independence.

He said that rather than facing serious economic problems, Scotland would be better positioned to prosper than Ireland was when it gained independence.

All's well then. Mr Ahern was misunderstood and he's disappointed that some newspapers have tried to portray that he is in any way opposing Scottish independence. In fact he states that he thinks the Scots have the same ingenuity and commitment to achieve huge success should they decide to go down the route of full independence. His back tracking is so verbose, I'm surprised he didn't offer to be one of our leading independence campaigners!
Critics beware! Even though you're on Alex Salmond's Christmas card list, don't rattle his cage without first ensuring your own bars are blast proof.
Tweet
Posted by subrosa at 14:10

Surprised the Herald would print such a balanced article.

Thanks OL, but it was one of my readers who was kind enough to spot it. I can't take the credit.

Did something similar not happen with a Norwegian politician whose actual words were similarly "misrepresented" by a journalist and seized on by unionist politicians?

Ahern was criticised by the Moriarty Tribunal for signing blank cheques for the then Taoiseach Charles Haughey,

Payment in relation to house


Money given to Celia Larkin

and so on and on

Mr. Mxyzptlk makes a very strong case for Ahern to be the President of the EU!!!!

If I were you, Subrosa, I would get your compatriots to demand a full UK referendum on your demand for Independence. The English will ensure you obtain a very very large majority!

Niko, I thought Ahern was an ex taoiseach and not a UK MP.

If I thought for a minute you were right strapworld, then I'd go for it.

The problem is that I have doubts England would play fair. They've never played fair in my lifetime.