The Jury Team Candidate for the Glasgow North East By-election is to be formally announced tomorrow but I understand it to be John Smeaton, one of the heroes of the Glasgow airport terrorist attack. 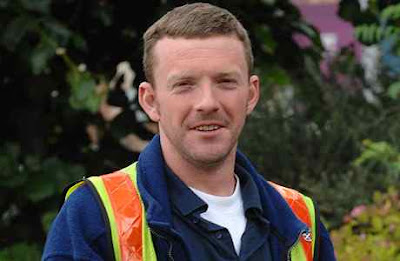 More tomorrow...
Thanks to Old Holborn
Tweet
Posted by subrosa at 23:38

Sorry Rab, Old Holborn, Guthrum etc, I like your blogs and I have a fundamental sneaky support for your position but, this is just one monumental publicity which will create a bit of media froth but very quickly no foam.


Be careful my friends because, by this, you are heading into Monster Raving Loony Party territory.

They will be happy, despite the fact that they own the franchise. They are loonies aren't they and some of their policies over the years have gone near mainstream, but?

Silly choice, just for a few headlines and some photo ops.

I'm still thinking about this FC. Lean more your way at present but will see how others feel.

Tend to agree this will be a 5 minute wonder.

FC, I understand what you are saying. My heart sank when I found out.

Speaking for myself, I think the bloke is a prize twat. He was bleating on last year that Gordon Brown was his pal etc etc.

But, nevertheless, let's give him a chance.

Auch Rab, good of you to answer FC and now I don't feel so bad thinking along the similar lines.

Such a shame because the candidate was trailed as a scoop for the Jury Team.

Yes let's give him a chance, not a lot else we can do really is there.

Rab, I salute your honesty.

We can still be friends after independence, I hope.

You Libertarians are a democratic party and quite evangelically so.

I suppose, in my book, that gives you the right to a few loony decisions, individually and collectively but, don't make it too much of a habit.

I thought this was bollocks last night before the release of the candidate and I stated so on OH.

I awake this morning and see that yet again our media obsessed fake celebrity culture continues to resonate and devalue politics, but more so, denigrate what Scotland is trying achieve.

I have nothing against John Smeaton, I hope he kens whit he's doin! I support FCs position Rab.

Quite happy to chat over a pint in due course!

Aye it's sad we're in this 'fame' situation these days and that's not to underestimate the lad's achievement at the airport.

Don't tell me it's sunny down there! Overcast and breezy here, not a bad day to dry washing but that's as positive I can be. :(

Can I just say that he is being backed by the Jury Team, not the Libertarian Party.

We decided not to field a candidate.

I'm pretty sure LPUK wouldn't go down the 'celebrity' politician route. And I would be disappointed if they did.

27 Celsius, sunny and with a breeze.

How Summer should be, always.

Did you see the photies of my garden?

Overcast in Killie, with a chilly breeze.

Thought that was the daily for Geenock, every day?

I'm not joking when I say it's 20 here FC and just lovely. Pruning to be done and a good day for it.

Yes I did FC, sorry I didn't reply. Lovely it is too. Wish I could just get the local tractor in to mine lol. Was out a lot yesterday and trying to look after the blog too. Sometimes things get a bit too much for a retiree ... :)

Rab hopefully it's improved. Was cold here at 6am and still overcast until around noon. Now it's just gorgeous.

I can see some blue bits in the sky now!

There you are then Rab, hope they grow bigger. Mind you there's not a lot of blue here really but it's still bright when the cloud covers the sun.

The people of Glasgow North East need a real MP not someone doing a 'jade Goody'!

He is kidding himself on majorily.

David Kerr is the man to effect real change.

I didn't realise Glasgow University had no human rights.

Isn't it strange that Smeaton was a perfectly acceptable candidate when Alex Salmond was trying to persuade him to stand for the SNP? He was also absolutely fine when the Labour Party asked him to stand against David Davies. But, when he stands as an Independent, he's a "joke"?

Put away the petted lips and think about this. Smeaton has genuine support on the street. People cross the street to shake his hand. He can't go into a pub in Glasgow for a quiet pint because he gets plied with drink.

He's got a hugely popular column in the Sun, where he comments on current affairs and makes his opinions known. According to the newspaper, it's one of the most popular columns they've ever run.

There isn't a politician in Glasgow who comes remotely close to that level of popular support. The more the broadsheets sneer at him, the more Glaswegians will cling to their own.

The man is genuinely likeable. Don't base your opinion of him on media reports. He's not media-polished because he's not a slick fast-talking politico.

We didn't approach John because he's a celebrity. We approached him because we did surveys in Glasgow North East and asked "Who would you like as your MP?" His name was put forward, unprompted by the public. We followed that up with more surveys which confirmed his popularity.

The people of Glasgow North East have already chosen John once. They'll do it again.

Evening Alan, no it's not strange really because if he'd had the machinery of a solid organisation behind him then yes it may have worked. I know at least one person in the SNP who had no experience in the political arena yet they have held office for some years now.

I've spoken to a Glaswegian friend (yes I do have some) and allegedly there's quite a bit of animosity about how John hogged the limelight about the airport incident when others were just as involved. I wouldn't know because I don't live near Glasgow.

"The machinery of a solid organisation behind him"

Ah. You mean a performing poodle, jumping through hoops and barking to the party line. Lobby fodder.

Haven't we had enough of them?

John's spoken frequently about the others involved. Talk to him yourself and he downplays his role. He can't help the way the media sensationalises it.

Anyway, the way I hear it, Smeato is absolutely loved in Glasgow.

Except for them that can't stand him.

As I said , The Monster Raving Loonie Party part deux.

You did a survey?

In which bars, careful there are lue and green ones in Glasgow.

Were your surveyors English by chance?

Or were they bluenoses in bluenose bars.

Did they go near Possil or did they say they did. Because if the went there they would not be alive now. Even the Polis don't go there, except mob handed and only then to support the Ambulance and Fire Services.

You are having the pish taken out of you, big time.

Alan, unfortunately I think our legal representatives should have had some form of training for the job.

To fill Westminster with people without an understanding of how legislation works both here and the EU is just compounding the problem we have today.

Laws have to be made on the evidence not emotion.

The machinery of a solid organisation offers the training some independents need. That's why some then leave the respective party and become independents and seldom vice versa.

I'm sure he'll do well if the Daily Record support him he'll do even better.

I just hate that nickname Smeato - where did that come from? At least Smeaton has some kind of style about it.

I don't particularly like "Smeato" either. He prefers "Smeats", which is what all his mates call him.

There's training and there's training SR. Far too often I see politicians who blindly mouth the party line - Hazel Blears for instance. We're not putting John forward tobe Foreign Minister or Health Secretary, we're putting him forward to be a voice in London for the people of GNE who, as you well know, have been systematically abused by our tribal political system.

The positive thing is, most of the nitty gritty work for people in Scotland gets done at Holyrood. We can send John to Westminster with a clear conscience knowing that he'll create merry hell. Maybe then the big parties will re-assess how they conduct their affairs, how they select candidates and how they should actually focus upon constituents.

Faux - we conducted quite a few surveys all over the constituency over a number of weeks. Anyone paying attention would have seen me calling for extra hands on Faceook etc.

No, we didn't ask everyone. But the numbers ran into the thousands. How many of the parties go to the public and ask?

Alan, Hazel Blears came up through the labour union system. I don't know of any independent MP who has done that and the only independent MSP I know was Denis Canavan.

I think John Smeaton will be eaten for breakfast at Westminster and very quickly he'll be absorbed into that great machine. His chances of creating merry hell are just about as good as Gordon Brown resigning today.

Most independents who have 'made it' in my lifetime have been single issue candidates and the single issue was one which was of utmost importance to the relevant electorate.

I wish him well, hopefully he'll make the whole affair more interesting as I'm not impressed by either of the 'main' candidates.

He'll be eaten alive by the bears of both colours.

You obviously know very little about polling and you have had the wee-wee taken out of you big-time by the Glaswegians.

Anyway, this part of the action is over and without wishing to plot how in the name of God Smeaton got into this position, I think that the enormity of what he has done will be realised and he will bail out. I hope so for his sake.

His appearances before the "Press" have left him haddock-jawed and it will dawn on his that it was a bad move.

Unless; I cannot think of an unless. Unless you are taking the piss of him? I which case be careful of Smeato.

Please note I was brought up in Glasgow but a spit from that constituency and all my Mother's side came from there.

There is a time and a place for everything and everyone and John is completely out his pond.

He is burnt mince if he continues and it will finish his surf run.

For the sake of John and your position, withdraw the nomination, please.