Afghanistan - Do You Know Where Our Aid Money Goes? 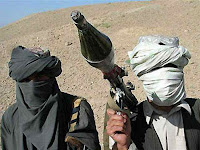 The Scotsman has an article today about how the Taliban are being bribed to hold off attacks prior to the Afghan elections on Thursday. That is just the tip of the iceberg to do with the Taliban receiving our money.
After reading OldRightie's post, I decided to investigate where our aid money goes in Afghanistan.
Before you read further you must read How you are funding the Taliban.
We are regularly told by the Westminster government that our aid money is going towards large scale infrastructure projects in Helmand, projects including a major road and hydro-electric plant. Also £18m is being spent on agriculture and rural enterprise development for young men and women in rural areas of Afghanistan.
Did you know we supply the Taliban with free bomb making materials? The fertiliser for agricultural projects is brought from Pakistan and we probably pay a 'tax' to the Taliban to ensure its safe arrival. Then we give it to the Taliban.
I'm also very reliably informed that to get supplies to British troops from across the Pakistan border, the transport contractors have to pay the Taliban a 'tax' for safe passage. This is built into the price we pay the contractor. My source states: We do not pay direct... in order to maintain "plausible deniability".
The UK is the third largest development aid donor (after the US and European Commission), giving just over £100m every year since 2004-2005, 80% of which is channelled through the central government. The fact that the Afghan state relies almost entirely on external capital and the provision of military support undermines its domestic legitimacy and this deters it from considering durable solutions and lasting peace. The security of one's family is the primary determinant of Afghan loyalty and Afghans know better than anyone how inherently precarious their position is if they are seen to be too close to NATO or ISAF forces.
One of the reasons Afghans can be hired but not bought is that they have an acute sense of history and of the relatively brief presence of foreigners in their country. Reflecting on the 10 year Soviet occupation of the 80s, many Afghans know there is nothing unique about this latest attempt to bring 'peace and development' to their country.
So far the cost to the British taxpayer of the Afghanistan 'conflict' is £12 billion. Losing the Plot - Britain's losses in Afghanistan is a must read to see the overall picture.
Am I any more informed as to why our troops are fighting in this war? No, but I am certainly more aware of how the Taliban survive and expand. We are giving them the money to make their bombs and IEDs to kill our soldiers.
The despair of the killings is felt by this writer. He gives little about his identity but from his post I think he is a Pakistani based IT consultant.
Sources: DFID, Scotsman, HEP
Tweet
Posted by subrosa at 17:22

I hope we can follow Clarinda's advice at G.O.T's and "follow the money".
A brief glimpse of google shows that the major "middleman" outfit is,

I wonder if we can dig out some UK links?

Is that Wiggy Bob and Fondlebum in the picture?

Oldrightie, I've been trying to dig out sources all day and all I had to do was ask Clarinda. She has an ability second to none for finding detail and yet I plough through endless sites to find little.

Isn't it time the blogosphere employed her as the main researcher?

More than disgusting scunnert I'm sure the Canadians contribute too.

As do the Italians, who were synonymous for it in Dhi Qar, Iraq. They are at it again in Afghanistan.

The only viable supply route, currently, is through Pakistan. The money, I think you'll find, has Civil Servants finger prints on it, the same people who are and will do their utmost to prevent Scotland from leaving the Union.

Makes you think who is at the bottom of this, who's globally profiting from souls departing this earth on both sides of the War?

DFID are trying to emulate USAID's style of filtering the money through secondary and tertiary companies - sickening when there's so much poverty in Scotland.

Gome on guys surely no surprise there? That's how Britian manged the NW frontier during the Raj. Kill some trouble makers and bribe the rest. History repeating it's self.......just another 39 years and 11 months to go before we're out

Why do they always have to play the big boy? Why must they always punch above their weight? It's like a pauper buying champagne for everyone and then not eating all month so he can pay for it.

Does that half wit Brown think it makes him look good?

(Talking of which, for a man who has just been on holiday he looked like a corpse when I saw him on tv the other night.)

I've been trying to 'follow the money' OR but it's not easy. My reliable source doesn't find it easy either as everything is covered by 'deniability'.

Bear with me and I'll keep trying. Thanks for the link.

I thought it was Mr and Mrs Brown on the beach at St Andrews OR. :)

Indeed it is CD and I'm sure accounts don't register anything like the truth but we have to keep digging.

No surprise Dram but it will be to some who think we're there to protect the UK. I wonder if the money is 'protection' money?

Of course it means we're giving twice tris, plus of course the lives of our troops.

I have just caught up with your excellent post. Yes, following the money is the point here. You could well be on to something. Keep going with this.

Morning Howard. It's difficult to find paper evidence as the Taliban tax is incorporated in bills as something else but you're right, we must keep trying.

I have just read the Telegraph and about to post linking to you. It is high farce!

Back from holiday to find your excellent post. This is how we fight wars now on High Moral grounds but in fact we are as usual mired in the sh*t that surrounds all these campaigns. I have highlighted your post in a story on my blog as well about Plausible Deniability.

I thought you may be away FL so have been doing my best to keep things up to date. Now you're back I can relax. :)

This is pretty scary stuff...leaving the disgusting stuff out of it...you scared the shit out of me with this well documented and researched post and yes you are right...Canadians are also contributing to this ...big time...

Politicians have got to keep their arms pals happy Baron, haven't they? If they didn't then there may not be that nice we earner when they give up their seats of power.

You're absolutely correct...God help us all...is all I can say.
Cheers