How the French Control their Children

Taken in a French Supermarket: 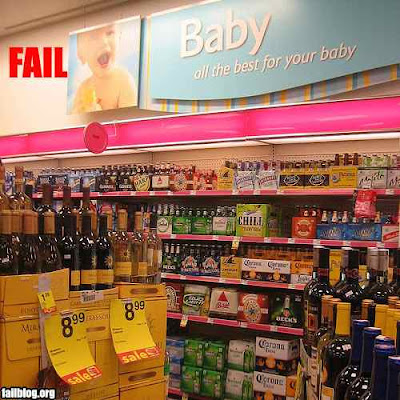 I suppose that's one way of doing it! Once my children hit their teens we would offer them a half and half mix of wine/water at dinner - they seem fine!

Here's the link (this time without the embed code at the end - sorry about that).

Same with mine GV. Many thanks for the link. Mucho appreciado. What a disgusting man isn't he.

Where was this photographs taken? It looks to me, if it is indeed in France, that it has been taken in a British-owned 'booze-cruise' supermarket in someplace like Calais.

It reminds me of pictures taken during the First Gulf War (1991) showing an alleged baby milk factory in Iraq with the staff wearing tunics in English rather than Arabic. In other words I find find it difficult to believe that a genuine French supermarket would have any kind of sign like that in English.

So, where was it taken?

Bill I shall find out exactly and email the person who emailed it to me. I just thought it was in France because the person lives there, but I'm happy to be corrected. I shouldn't make assumptions.

Bill you're right. It is a booze supermarket in Calais. I thought it was further south than that but that's the answer.