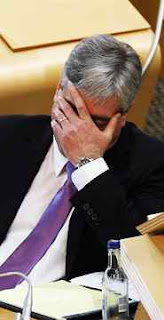 Oh dear, just when I thought it couldn't get any worse, labour members have demanded the result of the Edinburgh East candidate selection process be overturned after accusing officials of presiding over a postal votes scandal.  The poll was won by former councillor and housing convenor Sheila Gilmore earlier this month.  She beat lawyer Catriona Munro by a single vote.
But 15 members of the party, including one of the two scrutineers, have written to Labour's ruling National Executive Committee, condemning the result as 'tainted'. Twelve breaches of the Labour Party's own rulebook and of Electoral Commission guidelines were identified by the members, including the lack of postal vote verification.
Discrepancies highlighted in the petition include that there was no list of verified postal voters. The postal votes were not kept in a secure sealed box at the hustings but were transported in a plastic bag.  There were also only two scrutineers, both of them male, rather than the requisite 12, of whom half are mean to be women.
A Labour spokesman said, "Of course we will look at the letter but there is no evidence to suggest that this was anything but a well-run selection process."
What hope have labour when they can't even read and follow their own rule book. Poor Ian Gray, he certainly doesn't have to seek his troubles does he.
Source The Scotsman
Tweet
Posted by subrosa at 09:17

Or is it just coincidence?

lol And therein lies the problem!
What the Labour party think is "well-run" and what civilised society think is "well run" are two entirely different things - as we've witnessed over the last 12 years! Nothing but the sculduggery and dishonesty we've come to expect really. We shouldn't be surprised ;-)

In our new age of 'Austerity' it seems to me to use a inexpensive plastic bag rather than a very costly secure box make perfect sense.

and as for using twelve scrutineers, one need only say

i kid you not must be some kind of sign

Labour is rotting from the head and also the tail.

Auch yer an awfy cynic Billy. Seems like Brown's changing his mind because the daily rate isn't going down well with the opposition.

You're right TP, they must be in a really bad way when they're having problems with internal votes and postal votes in particular. Maybe the rule book doesn't have all the dirty tricks listed.

Morning Howard. The rot will soon reach the core then? I thought it already had.

Morning Niko, I see you're promoting thrift this morning. Problem is you see, labour have a book of rules and nobody seems to be sticking to them these days, except the odd few. They've just had enough by the sound of it.

What kind of sign is NOMEN? I've wished that many a time :)

Until they do learn not to cheat over postal votes I think they should be banned.

Any news from Glenrothes about the missing papers?

Morning Tris. I think there should be much more independent scrutiny at elections after the fiascos with labour in the past weeks.

Postal voting should be banned immediately. For statrters it might make the lardarses go for a walk once every few years. Still, I've been saying for years it's just practice for the biggy.

It's labour who brought it in to this degree OR. Previously it was only for the infirm, HM forces etc., people who could prove they couldn't attend a polling station. Why were they permitted to extend it? I don't remember a Westminster debate.

Afternoon Subrosa. Yes, you're right of course. Results should be scrutinised much more carefully. It seems that the UK is not to be trusted to do this, so pehaps we should have UN or EU scrutineers, like third world countries are forced to have, to ensure free and fair elections.

I like my parents to vote on my behalf, if I didnae I'd huv tae vote in England and that just wouldn't do!

Hope to feck they're ticking SNP and not their Con/Lib love affair!

Seriously though Postal voting is a scam waiting to happen (well we know it's happening), the Americans living abroad have to go into Embassies to vote, seems fair enough, we aren't too busy to take 30 mins to cast a vote and the seriousness of non-voting?

If you don't vote you can't complain afterwards!

If you want to do something however small to try to hasten the end of this government there is a petition recently been placed on the No 10 Downing Street web site calling for the resignation of Gordon Brown.

It can be found at:

Sungei hello. Thanks for the reminder. I think most of my readers have signed it by now including myself.

I would have preferred if the petition called for the resignation of the lot of them though, but still, one is better than none.

I have a multiple personality, bit Goat, bit Bullterrier and a wee bit normal, but the balance changes daily.

Billy you're so lucky having such a split personality. Mine is either down or up.

There is another really important petition on the No 10 Downing Street Website.

I have signed of course and recommend, nay urge, all our dear readers to do likewise.

I used my other name

I just can't sign that Billy. I can't allow the country to get further in debt and that's what would happen don't you think?

Like 'hard faced witch' Billy? With a consonant change of course.

Billy, I shall force myself all in the name of self-preservation.