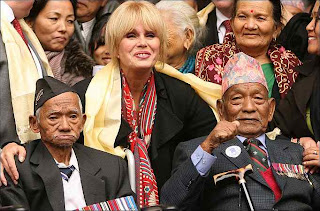 After the defeat of Gordon Brown's government yesterday on its policy of restricting the right of many former Gurkhas to settle in the UK,  the LibDems published a list of labour MPs who rebelled against the government.
Not one Scottish labour MP rebelled.  Each and every Scottish labour MP voted with the government to restrict the rights of these men who offered their lives to protect us.  I do hope this will be remembered during the next election campaign.
My thanks to Forfar-Loon
Tweet
Posted by subrosa at 08:02

Have a look at Tom Harris's latest pompous and arrogant post. Do try and stay calm whist reading.

What a bunch of arse bandits, the shame of it, have they no dignity? Funny how these leeches get all the perks of the system, don;t know what a normal day's work is and the only thing they risk daily is their waistlines.

Hope they get turfed out next GE - if the PM goes down in flames today over his reforms then he must resign - he will have lost the confidence of the hoose - bet they vote to remain at the trough though - that will be the last straw for the public.

Have a braw one, Army v Navy this weekend at Twickers - yeeeha!

I'm about to go and read it Howard, had an extra coffee to give me strength.

No honour amongst thieves as they say CD. Oh that's this weekend is it? I know a few who'll be there - shouting army of course ;)

It's very disappointing. I wrote to my MP asking him to support the motion and oppose the Government. I got a four word reply "i will support them" - no capital letter or full stop, that was it! No explanation, either.

I guess he knows I wouldn't vote for him even if he was the only candidate but even so......

I've read it Howard. How restrained your comment was, I didn't bother saying anything to the dishonourable gentleman.

Morning Caron, just goes to show what a disgraceful bunch the Scottish labour MPs are though, mind you I'm sure we've all known that for years.

Well done Nick Clegg. He has fought long and hard for this so I congratulate the LibDems.

Tom Harris - blogger, good enough writer, but above all a nulab careeerist, who will never really cross "the party" when the chips are down,


Thank God the Ghurkas did not need them - just like us!

Get over to A Labour Chanter

Breaking Story of Ian Grey leaving his wife for a man.

I really feel sorry for the sod.

I actually had a teat in my wee eye yesterday eve.
And Nick Clegg shot up my rankings yesterday.
Made Cameron look a little second rate.

Anyway Tom Harris needs flayed alive.
Happy to put my name forward as the man to do it.

Dont let this campaign drop, yestersdays vote although great has no legal binding.

Perhaps they were more worried about helping to cover up Iain the great leaders rectal issues than to care about what some dusky chaps are on about.

Just a thought and not a nice one at that!!!!

Morning to you too LotF. Billy's just said it's true about Iain Gray, I truthfully thought if a joke when I read it.

No wonder he's been lying low and looking uncomfortable at FMQs. I'd resign and go back to teaching.

All eyes on Ian Gray at noon today now Billy and LotF.

Who's going to win on Saturday?

Of course this campaign needs to be kept in the public eye LotF but with Joanna Lumley doing the PR I'm sure it will. She's certainly worked long and hard on this and with heartfelt passion too. All credit to Nick Clegg though, I believe he's also done his fair share of hard work.

Did you really expect that bunch of central belt stalinist numpties to do anything else? In Tom Harris' case, read his blogs on the Lib Dems and it is quite difficult to draw any other conclusion than because it was a Lib Dem debate that he voted against.

Confusion was caused by my lack of ability.

Ah right Merkin, never mind, I've put a link to you on FMQs post and if you do a comment to the same effect on your blog then there won't be any misunderstanding :) Good of you to explain.

No Richard I didn't. What I don't understand is why anyone thinks Brown is a man in whose hands we should feel safe. I don't.