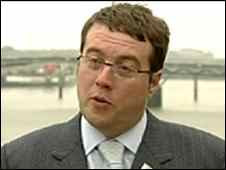 Stephen Purcell, the Leader of Glasgow Council, has announced the council's minimum wage will rise to £7.00 an hour the Sunday Times reports. The increase will affect around 700 council workers. The present national rate is £5.73 and the rise to £7.00 is more than a 20% increase.  The only other authority which operates a similar policy is the Greater London Authority.
He also stated the council will give preference to contractors who offer the same rate to their workers, affecting up to 80,000 privately employed staff.
The move has provoked a backlash from business leaders and taxpayers groups who have condemned it as an unbelievable example of public sector profligacy while the rest of the country is struggling.
Mr Purcell said, "Almost one in five of Glasgow's workers are paid less than £7 an hour and the Glasgow living wage has the potential to make a huge difference to thousands of families.  It's the right thing to do."
The Times states Purcell's decision will embarrass the Labour party which has been resisting union calls to raise the national minimum wage.
A brave decision by Mr Purcell, very brave indeed and I hope it succeeds as he says, in raising staff morale, productivity and quality of life for the lowest paid in our public services.  He makes no mention of the sources which will fund this new policy and one thing's for sure, he cannot ask council taxpayers to accept any increase when other councils are freezing council tax.
Another move towards his future leadership challenge may be a fair assessment.
Tweet
Posted by subrosa at 03:36

Meanwhile Glasgow's School's sit in a state of disrepair.

The questions is why this wasn't undertaken when inflation was particularly high, why now?

"why now?"
Is this because of such high employment they need to retain workers?

Personally, I think it's the beginning of an attempt to form a Scottish Labour Party - just in case.

Morning all. I'm with Brownlie on this and think it's a move to raise his profile on the Scottish political scene. Whether it's a future leadership bid or as brownlie says, forming a purely Scottish party, we'll have to wait and see won't we.

Wardog, I'm with you there about the schools. Wonder where the money is coming from.

Oldrightie, I don't think so, he wants to show his socialist principles maybe. Pity he won't fix his crumbling schools too.

Brave or foolish? Possibly foolish as it's not something which can be retracted without legal fights I shouldn't think.

I do enjoy how he's tipped as a future FM, yet he's still a cooncillor. Albeit, one who decided to switch his sexual orientation once he was elected as leader of the City council. Never mind Scotland being ready for a Labour FM, are we ready for one who openly likes the cock, yet?

Oh Monty yer awfy near the bone there :)

His sex life is of no interest to me but his behaviour during his 'outing' was deplorable.

He's tipped as a future leader because they've run out of people with common sense and Scottish values.

Rosa*, he outed himself. There are many ladies of my acquaintance who claim, he's at it, having been subject to a stray hand or to from the confused Purcell.

I note your discretion Monty, indeed I do :) I agree with your female friends entirely and his subsequent behaviour which doesn't do people of another sexual preference to myself any credit.

I hope in an independent Scotland we won't be built on opinions from people who are not hetrosexual or are left handed and the like. These things don't build a culture.

The gay society is a small part of the whole of our society, but along with the muslims in Scotland, appear to have a more influential voice than the indigenous population, who are pilloried for mentioning this.

You do disappoint not jumping to a boner gag Monty but then again at your age ...

This may be an attempt to scuttle the concordat and play the SNP off against the unions.

Aye scunnert, I see where you're coming from but admit I didn't at first.

Could well be a directive from London when you think about Brown's speech to the conference when he said Scotland was the only place which had had strikes.

We'll have to wait and see. It's the people of Glasgow who will have to pay so will be interesting to hear what they say.

Glasgow can do this becouse labour have almost a complete manopily over the city. I agree that everyone should be payed a decent wage but what about the low paid in the private sector having to watch their peers recive a 20% increase in wages while they struggle on and pay their taxes towards this.

You see this is the problem i have with the public servive in Scotland, its jobs for the boys and effectly vote labour and we will pay you.

Glasgow is no diffrent from Moscow in the 80,s, just look at George square, its now red.

Spook it's not that long ago that Glasgow council had different coloured job application forms for people who had family already working in the council.

I wouldnt put it past them, that council would not look out of place in Cuba or NKorea. Prunels Mother is to stand as Lord Provest of Castlemilk this year and his wife,well she is in charge of the local Comunist branch in Govan.

Gosh Spook I didn't know that. I'm not too clued up on Glasgow politics but I do read Bellegrove's blog and the Clampit.

I wonder who will become unemployed as a result of this. After all, if you have £120 to spend and you raise the wage to £12 per person from £10 per person, you have to cut the number employed from 12 to 10.

But will those who will be unemployed as a result of the council cutting back on what it would otherwise have spent the money on even realise why? Unlikely.

What will happen is vacancies won't be filled perhaps. I'm not too clued up with Glasgow council but I believe it's very over-staffed as well as having hundreds of jobs for the boys.

Perhaps they'll tinker with housing stock in some way or sell land.

This gives them the perfect excuse to raise the money by any means. After all who can complain when he's giving the poor lowly paid a 20%+ increase.