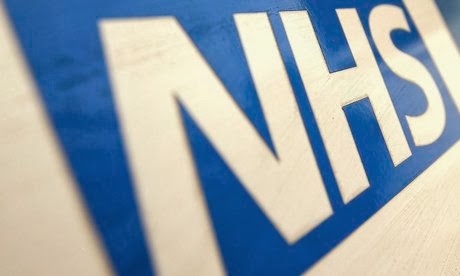 This post concerns the English NHS but, as many readers live in England, it’s important they know what’s happening to their medical data.

What is happening is that it’s being sold to organisations such as university research departments, insurers and drug companies which will be able to apply to the new Health and Social Care Information Centre (HSCIC) to gain access to the database, called care.data.

If an application is approved then firms will have to pay to extract this information, which will be scrubbed of some personal identifiers (seriously?), but but enough to make the information completely anonymous - a process known as pseudonymisation.

Starting in March, medical data covering the entire population of England, will be uploaded to the repository controlled by the new arms-length NHS information centre.

A leaflet is being sent to every household explaining the new database, with the patient being given an ‘opt out’ choice, but how many people will not realise the importance of this further intrusion into their personal lives?  Of course, if an ‘opt in’ rather than an ‘opt out’ option had been offered, then the population may have scrutinised the leaflet more thoroughly and decided against it.

This is all part of the agenda of government and big business and the on-going privatisation of the English NHS.

Recently the FT reported that the EU/USA trade deal has been ratified. (Apologies no link but it’s behind a paywall). It appears David Cameron has been pushing hard for this as it opens up all public services to tendering from USA private health giants.

Did anyone watch the Dave: Loan Ranger programme on Channel 4 last week?  Dave Fishwick was investigating pay day loan businesses and how his bank, Burnley Savings and Loans, could help reduce the scandalous interest rates charged.  He trudged round some of the big lenders in an attempt to pay off the loans of some unfortunate people.  What he found was that every address given on websites was solely a forwarding agency.  Then he researched further and found the companies involved were all linked to global financial organisations; thus profits were going out of the UK.  The series continues this week.

The link between the new English NHS database and Dave’s pay day loan series may seem tenuous to some, but once this database is up and running it will be obvious that the English NHS will become another huge earner for foreign investors.

I'm sorry but I don't follow your logic.
Doctors are coming to realise that the effectiveness of drugs depends on age, sex and even, horror of horrors, ethnicity. As long as personal data is anonymous it can only be to the public good that it can analysed as part of a large data set, so-called 'big data'.
Does it matter if this data is sold? Not really but maybe it should be freely given away?
As for pay day loans, the solution is in everyone's hands - don't spend what you haven't got! That is a message best learnt in childhood I think.
Many years ago a lad in digs with us was in a panic because a well-known retailer was sending him threatening letters as he had not made payments on his store card. For him the first call on his money was getting drunk on a Friday night. If he missed last bus he took a taxi. His rent payments were pretty low down on his priorities. We got his finances in order and even got him saving towards a cassette recorder! Then out of the blue he bought a new pair of trousers. That was because the retailer had now written to him to tell him that he 'had' £10 'credit' (plus his debts!).
Don't blame foreign financiers for the stupidity/ignorance of their customers.

Today, I, like millions of others did some on-line banking; ordered a repeat prescription; a grocery delivery: renewed my annual insurance; posted on several other sites including facebook and twitter; and sent off several e-mails.

No doubt the potential is there for my ‘data’ to have been compromised, but I take that risk daily. Probably as I type, some spotty youth at the NSA or GCHQ is pouring over my on-line activity, trying to make sense of it.

What NHS England is proposing is no worse than any other activity we participate in, and besides the evidence gleaned just might save someone’s life.
So I would caution against the unconditional acceptance of the hyperbole of the press and other media.

And here I must put in a word of praise for NHS Scotland …
We, in Scotland, already have a similar scheme, its called - SHARE

In its wisdom, NHS Scotland have made…
- this an ‘Opt-In’ scheme
- more rigorous controls as to who can access the data
- can only be used when it can be proven is for betterment of health/medical treatment

SHARE is just what such a scheme should be – for the benefit of science, understanding and the improvement in the health of ones fellows.

Information is power - the power to control. As one wise person said> Power corrupts.

That is the danger.

You must never assume that the State is going to collect this data and be bengn.

I breath therefore I am a dot in somebody or others data base.

Not a dot of any significance, just one in a matrix of nonentity all jelled in mediocrity.

So the FT advises the Transatlantic Trade and Investment Partnership deal has been ratified?

Yet another nail driven by the hammer of global oligarchs into the coffin of democracy.

Thank you for the head's up. I've already opted out of the now defunct "Spine" project, and also one more local. And now I have to do it again. What is it about "No", I wonder, that they do not understand.

"With the right safeguards in place to protect patient confidentiality this new system will be of enormous benefit to patients and help reduce the burden of heart disease in the future."

The NHS doesn't seem to have the right safeguards in anything it does and my recent experiences with the NHS and those of several other people I know, prove beyond doubt that the Department of Health just does not care about patients.

As I have been saying for some time now, the NHS now exists to:

My point is that the data will not be anonymous Jim. How could it be if one of the intentions is that the latest big pharma ‘miracle cures’ are directed to those in need of them.

If it’s anonymous how can they do that?

Well said Alice and as the English NHS is being sold off into foreign hands, it makes me wonder where the data will be distributed.

Re collection of info for the government Stewart, I asked a few years ago for medics to stop requesting unnecessary information from me. If they do ask irrelevant questions then I ask why. Usually get a ‘doesn’t matter’ and I suspect the box is marked ‘refused to answer’.