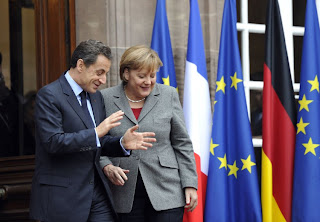 While Greece dithers about its future within the EU and the Merkozy decide Greece should have its own bank account, it's well known in EU circles, that Angela Merkel's relationship with Nicolas Sarkozy has been fraught at times. Therefore it was a surprise to many to find that she has decided to openly campaign for her French colleague who is facing elections this year.

Although the EU is based on a ruling German/French duo - Adenauer and de Gaulle hammered out the Elysee Treaty and Kohl and Mitterand held hands over the graves of Verdun - there is unease in Germany, because if Sarkozy lost it would be a severe setback for Berlin.

Merkel's reason for offering her support to the weak Sarkozy is not because he supported her during her campaign but because she is horrified at the prospect of Sarkozy's challenger, the socialist Francois Hollande, succeeding. Hollande describes himself as a 'pragmatic leftist' but his campaign manifesto is so full of expensive promises that even the centre-left Social Democrats in Germany have their doubts about him. Holland's European policy is causing Merkel particular concern and so far she has primarily been able to push through her vision of European austerity only because she knows Sarkozy is on her side.

Hollande has already stated clearly that he will overturn the fiscal pact, the heart of Merkel's European policy and it's this which causes the German chancellor grief.

Why would the leader of a country attempt to influence the electorate of another when it's none of their business? It smacks of desperation but it also shows how far Merkel will go to ensure her EU monetary policy succeeds.

Will her public support be effective?  At present the feeling is that Hollande should silently savour Merkel's intervention because it may end up helping him more than Sarkozy. Many French voters are fed up with their president, who is constantly citing Germany as a shining economic example for France.

I'm uncomfortable with this and wonder if it's the start of German interference into elections in other member states.  Sarkozy has three months before he faces his country. The Merkel/Sarkozy co-operative campaign kicked off yesterday with a joint television interview broadcast on Germany's ZDF and the French station France 2.

The EU is progressing in a distinctly autocratic manner. If Sarkozy does win the Merkel will be further empowered and that doesn't bode well for the future of Europe.

Why does Frau Merkel support the diminutive Monsieur Sarkozy ?

The answer is simple…
Frau Merkel is from a somewhat severe Lutheran East German background. An extravagant lifestyle is to her an anathema.
However in her ‘little friend’ Monsieur Sarkozy, she can indulge her guilty pleasure in the ’joie de vivre’.

For in Monsieur Sarkozy she has found a true French bon viveur. Sarkozy happily spends £10,000 [not a typo, it is £10,000] daily on food and drink. He is reported to have the finest wine cellar in all of Europe.
He does not just have one chauffeur driven car; he has a fleet of 121 such vehicles, which cost £275,000 in fuel alone.

In 2011 it cost the French taxpayer £95million, to fund Monsieur Sarkozy’s extravagant lifestyle.

For Frau Merkel, a day at the Elysee is better than a bierwurst sarnie any day.

Super contribution JRB. Isn't it worrying though that the likes of Sarkozy has such power?

Was speaking with a Frenchman earlier and he couldn't see any way Sarkozy would be re-elected. He's now disliked over the political spectrum he said.

When a structure begins to crumble, struts are placed to support the legs. When a leg is gone even the struts become useless. Merkel is thinking only of herself and her own grip on power. Hateful little communist.

Any news on Greece yet ? That's 16 meetings I've heard about to try and solve that wee crisis.
Merkozy are both panicking. Their dream of a totalitarian state where the elite can enjoy a luxury highly paid lifestyle at our expense is looking like collapsing before it even begun.
Annoying things like democracy ( well what little is left) keeps getting in the way. Oh how they must wish they could just take over govts that fail to deliver. Oh hang on.....Greece, Italy, Ireland ( fiscal) ..........erk who is next ?

Hi SR, can I suggest the answer lies in the old pirate adage,
"we had all better hang together, or we will all hang separately".

Politics and bureaucrats; the blind instructing the blind to lead us all into the financial ditch.

The SPD has announced it will be campaigning for Hollande. So that's the two major German coalitions actively involving themselves in the election of the French president.

The Italians haven't taken a view yet as we're shovelling our way out of the snow right now. Still: Ever Closer Union would suggest Senator Monti working with Merkozy.

Merkel's certainly in the driving seat OR and it suits her to have a poodle such as Sarkozy as co-driver.

No news that I've heard RM. Endless meetings though I believe.

We're already in a financial ditch Crinkly don't you think?

HG now that is interesting. I knew there was opposition in Berlin to Merkel's decision.

It wouldn't come as a surprise for Monti to side with Merkozy would it?

Auch the wee ones will love the snow. Possibly the first time many have seen it on low ground. Good luck shovelling. Fortunately we haven't had to do that here - yet.

It is incredibly naieve but also politically inept of Mrs Merkel to openly declare support for Sarkozy.

I mean imagine our reaction if Sarkozy suddenly started telling us who he thought we should vote for?

Perhaps Merkel actually wants him out?

I thought that too initially John, but she's too shrewd to be so foolish.

The French are seemingly fed up hearing about Germany, so you may well be right and her strategy may make way for Hollande, although I doubt if he would be as maileable.

You're right to be concerned.

In the cases of Greece and Italy, of course, the Germans didn't bother with elections, they just imposed their own candidate.

How would you feel if a future German chancellor decided that Mr. Salmond was being too extravagant with his promises of free everything for everybody, and imposed (say) Malcolm Rifkind instead?

Is it so far-fetched?

No it's not so far fetched WY is it, particularly given what has happened to Greece and Italy as you say.

Yet the SNP want an independent Scotland to be in the EU...