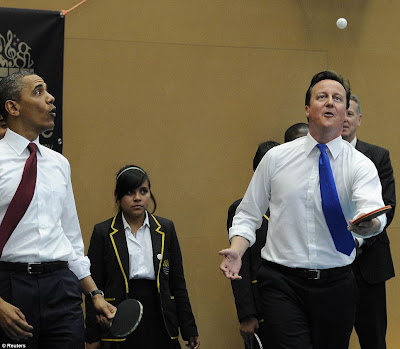 What's the girl thinking?
More and more I despair at the actions of our Prime Minister.  Surely he must have realised that the choreographed table tennis stunt was distasteful and not what is expected of British Prime Ministers.  Whilst I realise in this day and age that photocalls are an essential part of self-promotion from PMs, I expect Britain's most senior representative to act with dignity and not behaving like a schoolboy.

Why do British Prime Ministers have such a desperate desire to impress any president of the US?  When did we become so insecure?  Any relationship the US has had with Britain has been advantageous to them and everything the US government undertakes is calculated in terms of dollars, not relationships.

We are involved in two wars. I wonder how the family and friends of those who have lost their lives in these wars feel about seeing the two men responsible for the war operations, cavorting like teenagers instead of behaving like statesmen when in the public eye.

In an attempt to show the world they are 'just like us' the two leaders have shown how superfluous they are to the serious aspects of government. Then again, every business needs a chief salesman.

A badly judged photocall indeed.
Tweet
Posted by subrosa at 09:19

Sadly gravitas does not play well in our dumbed down culture any more.

That’s just it – Cameron and Osborne et al have never stopped behaving like overgrown schoolboys. The have failed to mature and lose that old Etonian / Bullingdon Club attitude.

They are happy to have little Cleggers as their ‘fag’ and target for all the brickbats.

Too often they have shown a distinct disregard for the rest of parliament, treating their fellow MPs as a shower of mere oiks.

As for us, the hoi polloi, I doubt if they ever give us a thought, and they certainly never pause to consider what we might think of them.

OR, am I showing my age by thinking this nonsense is unbecoming? Must be.

JRB, there are quite a few in the Libdems and Labour who also consider themselves lords of all they convey. Many in labour went to private schools and continue by sending their own children.

Super cartoon, I missed that one today.

The comments made recently about "Call Me Dave" showing signs of being a great Prime Minister? As the photo shows he hasn't the gravitas to be anything other than an opportunistic hooray.

Our American ally? When will he overcome his ego enough to actually recognise who he is and the responsibilities that his position brings?

These are not world leaders. These are figureheads and con men. They do us no favours. The ballot box will be very unkind to them both in the not too distant future.

Call Me Dave's just a glorified salesman - the same as Obama petem.

I do miss leaders who carry some dignity and stature. The last one of those was possibly John Major because he didn't try to be all things to all men yet we could glimpse his 'human' side.

How a true leader acts -

What more can I say William. Isn't Eck marvellous?

He supports Scotland and doesn't mind being seen as a fool doing it.

Cameron and Obama are only interested in grandstanding on the international stage.

Can you tell me anything of international importance they have declared in the last week? Other than the new ID cards.

Sixthreenine, my caption was 'Jeez I'm glad it wasn't Alex Salmond. From what I've heard of that man nobody beats him'.

Yes, your Eck is wonderful. Impressive doesn't come close regarding, for example, his recent appearance on the Daily Politics Show. I am interested in what Scots have to say about what appears to me to be a new attack on the independence of the Scottish legal system.

I'm hoping the Peat Worrier or Love and Garbage write something about that Jeanne.

SR, your reply reads like one of Bernard Woolley's conjugations -

"I have an independent mind
You are eccentric
He is round the twist."

William, I don't know whether to feel flattered or insulted. :)

Neither - Salmond is round the twist. ;)

At least Obama met Cameron. No meeting with Salmond? Is Megrahi still an issue? You have to wonder.

No meeting with Salmond required. Cameron is PM of the UK. Just how it is.

On the boys messing around, nothing made me cringe more than seeing footage of Salmond playing football. I like it that he can go on HIGNFY as a panel person and go down a storm but I'm not so keen that the prog used this footage to take the p*** out of him. Salmond is overweight and needs to do something about that. I was amazed watching the Portillo doc the other Sunday at how good looking Salmond was before he grew that treble chin. Dump the curries Alex, its bad for your image and your health. We need you. Sort it out.

As for Obama? While he was here the Israeli Premier was receiving standing ovations from the US congress for saying , basically, **** the UN and **** Palestine. Yet here we are sending Apaches to Libya to get Gaddafi. Vomit inducing stuff. That is what America stands for and here we are, the UK, following like demented puppy dogs.

I don't think Alex Salmond is too interested in playing table tennis William. He had other matters to attend to yesterday. Not least the loss of an airbase.

I heard Salmond was on a diet Jo but it's not showing as yet.

He appeared on "the Hour" on STV the other day Subrosa looking very relaxed indeed.

I missed that Jo because I usually avoid these programmes such as the One Show etc. Will try to find it on some player but then, Alex is always relaxed. If you fervently believe in something then you are, don't you think?