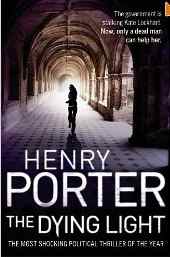 My local librarian suggested I may enjoy Henry Porter's The Dying Light and she was right. First published in 2009, it's set a near-future Britain where the tentacles of the surveillance state have been extending their reach throughout society.

I don't intend to disclose the plot but I it's worth mentioning - as the author does in his Afterword- that all the laws used and abused by his fictional government are already on the statute book.

The subject of this post isn't a book review but a serious issue. In 2009 ID cards were still on the statute book although the Tories loudly insisted, if they were elected, they would be scrapped. They were.

However, the coalition government isn't so vocal about the new national identity system - dubbed 'identity assurance' - which they intend to implement from August next year, with a prototype of the new system due to be in place as soon as October this year.

The new system 'will aim to reliably identify users of government websites' as part of plans to deliver more public services via the internet.

Visa is known to be involved in the plans and is conducting trials that would allow its customers to log in to the site using credit card details.

Of course the usual spin is being applied to this reintroduction of identity cards - 'more difficult for fraudsters to dupe the benefits and tax systems' and 'the shift will cut Whitehall administration costs' - but details have yet to be publicised.

The coalition government, with it's 'openness and transparency' wouldn't be turning opaque would it?

I thought the Government knew who all its citizens are.

But the census didn't give them enough information Joe.

After three score years and more, there is little about me that ‘the powers that be’ don’t already know.
The details that go to make up my life will either already be on file or will, under present legislation, be able to be easily accessed.

No doubt, as we consider this topic, some government underling has condensed us all onto a memory stick.
Our other selves are probably sitting in some London watering-hole in the jacket pocket of an anonymous grey pinstripe suit.

It was the last Census as I understand it. ID cards will make such things obsolete, as an RFID chip compulsoraly carried at all times, used to purchase any goods, attend any clinic, access any account - web based or High Street - will ensure your every move will be tracked and purchases/attendances recorded. Why? Why do stockmen put up fences? To keep the cattle under control. Wild animals are game, shoot on sight. The cattle might get ideas, and their destiny is already earmarked.

I wonder if the book is anything like 'The Last Enemy', available on DVD from Amazon, five hours long, equally based upon a near future scenario using current legislation as a base. Intriguing, fascinating, and frightening.

Or watch here, with an introduction to today's technology:
http://www.youtube.com/watch?v=8kbqCKe8Ymo

On your recommendation I've just ordered it from Amazon with free delivery. My local library doesn't stock it. :-(

This will be coming here soon as well Subrosa:

No doubt John, but the underhanded manner in which ID cards are returning shows we matter little - if at all.

I'll have a look for The Last Enemy Derek.

It is all about control but what is concerning about this new development that all 'plastic' is involved. We will become like Eire and deal cash only or barter.

Auch Jock that's a shame. I do hope you enjoy it. Email me and let me know what you thought.

Oh Billy, that knocked me out of my daydream.

The 'plastic' chip and pin are already obsolete. Microchips the size of a grain of rice have long been placed under the skin of dogs and cats for ID by scanner. The latest (?) technology has developed micro-micro mechanisms that are in the blood stream. Once we become living machines, we are totally absorbed into The Hive. Resistance is futile. Death at an automated pre-programmed point achieved when any set of demanded circumstances are broken - all in the name of making society 'safe' and 'secure' - for the children.

This is a future scenario the engineers and scientists are reaching for in order to satisfy the oligarchy who control their funding.

It's all about the money/resources/population control. WE are their greatest enemy.

Derek, I've a family member who says exactly that. The technology has been available for some time and is used in areas of which we are uninformed.

I can understand why details are not made public though, but you're right, we are their greatest enemy.