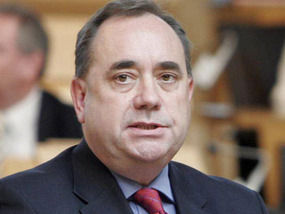 One in five Labour supporters wants to see Alex Salmond voted back into office as First Minister.  The Ipsos Mori survey results also show that nearly a third of Tories and LibDems would prefer to keep the SNP in office.

The results fired speculation over a possible coalition between the SNP and the Tories or a 'rainbow' pact with the SNP, the LibDems and the Greens.  The SNP deny they would accept the possibility of an alliance with the Tories, although in this area, which was Tory for years before John Swinney historic win, there are plenty Tory voters who do believe in independence.  But such an alliance would never be accepted in many parts of Scotland so it's a non-starter.

Tonight it was announced there will be leaders' debate in the run up to 5 May.  Good. It's only right television is used because it is the medium which reaches the majority of the population.

However, niggling away at the back of my mind is the manner in which the MSM's attitude has changed in the past couple of weeks with regard to the SNP government and Alex Salmond in particular.  Such a speedy change of heart smacks a little of media tactics to build up the SNP after months of building up Labour.  The Scottish media know full well Scots tend to favour the underdog, so is this the beginning of an 'underdog swap'?

Alex Salmond speaks for Scotland:  he is the only leader in the Scottish Parliament who has no party affiliation to Westminster. It will be vital he ensures he doesn't allow his party or himself to be placed on a pedestal during the campaign.  It won't be an easy task, but if anyone in Scottish politics has the skills, it's the leader of the SNP.

What The EU wish they get. Follow their desires to see which way the wind will blow.

It's so easy isn't it OR, when all they have to do is insist the taxpayers of every country pay for their wishes.

I wouldn't buy the idea of the MSM "building up" the SNP Subrosa. I would never trust them on that one.

deliberate seem thoughtful get the soft Nat vote listening and then just prior to the election.

Throw in some scary economic predictions and bobs your uncle Iain Gray is First Minister....
Alex Finally leaves the stage to a slow handclap...


Bit of a misspelling there


Unionists Prefer To Stab The SNP Government In The Back

Jo I don't trust them, that's my point. I'm suspicious of any positive press the SNP get between now and the election and just wonder if it's a ploy by the press so as people will think 'that poor Mr Gray doesn't even get a decent article in the paper'.

That's the point Niko, I've a feeling they are attempting to lead them up the garden path. But the SNP aren't stupid Niko. Nobody in it needs acting lessons (paid for by the taxpayer) before they can stand up and speak to the voters.

Naw Niko, you've got that wrong. The investigation is not on the contents of the report and that's what others were complaining about.

It's too late and too close to the election for that tactic to work, Subrosa. Nor are the SNP shown enough ahead in the polls for that to be credible.

There is also the fact that the wily AS isn't going to fall for any such tricks nor his excellent front bench. Now I am not thrilled by the details of the debate which seems pretty poorly done, but I suppose better some debate than none.

Why Iain Gray is stupid enough to agree...

What *I* want to know is why the Westminster government so SUDDENLY decided that there was something going on in that COBRA meeting that they didn't DARE let the Scottish government know about?

Exactly WHAT was it they are so desperate to hide--STILL? Are there MORE attempts at secret Westminster deals they want to keep hidden?

She was invited, and then she was suddenly NOT invited without even the courtesy of a phone call. While this was a slap in the face to Scotland, I suspect there was more to it than that.

Westminster's recent history regarding Libya has too sleazy to believe that porkie.

So who do you want as FM? Ian Gray or Alex Salmond? That's the question that really counts in the May election. I suspect as we get closer to the election more people will think Gray is nowhere near to Salmond as FM material whether they are normally SNP voters or not.

I suspect there's far more to it too Jeanne. Isn't it good to be cynical?

Aye Strathturret. The debates will be interesting. Not only with Eck but Nicola Sturgeon and Jackie Baillie.

There we go: new poll out today and Labour are streaks ahead again.

We live in strange times!

Aye Jo, no surprises there though are there? ;)

I heard that yesterday morning Strathturret. Strange times indeed but it won't do the SNP any harm.