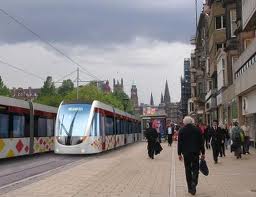 The Edinburgh tram project is once more in the news.  Audit Scotland reports the company constructing the controversial tram line is at risk of lacking the skills and experience to finish the project.  I do wish they would tell us something we don't know.

The city-council owned developer TIE's chairman stepped down with immediate effect in November branding parts of the project "hell on wheels".  A new chairman was selected last week.  Is it any wonder? 99% of the infrastructure construction works should have been completed by the end of last year.  In reality the figure was about 28%.

Audit Scotland also said that 74% of the available funding had been spent by the end of December 2010.

Mediation talks are due to take place soon but Edinburghers - and those from further afield - know that there's been far too much talk and not enough action.  Talk, in this type of situation, isn't cheap.

Audit Scotland say the project cannot be completed within the present budget.  They say TIE isn't up to the job.  What is the agenda here?  Does the council want rid of TIE? Is TIE's continual bleating about the incompetence of the council an excuse for more money?

Whatever it is, for the next few generations this one tram line through a small part of the city will be Edinburgh's white elephant.  I certainly agree with Audit Scotland insofar as they suggest the Scottish government should now intervene and knock some heads together to ensure one of these gliding feats of engineering decorates the once-upon-a-time delightful Princes Street.
Tweet
Posted by subrosa at 12:32

Interesting, The Taxpayer's Alliance have called the English HST2 Project the same. Looking around one wonders if our power's that be have gone in for breeding them.

Demetrius, I don't know because I've no information about this other than what I read in the press, but it does appear as if those concerned (apart from contractors) have no knowledge of engineering or such projects.

Of course the money's been spent. That's what councils are good at.

I'd get expert engineers in charge from the public side of it, then they might see progress. Having councillors in charge of something of this scale is asking for trouble.

"Hell on wheels"? More like "Holyrood on wheels".
Times four.
Look at the arithmetic of what has been spent versus what has been completed. The full scheme will cost £2Bn.
The present Scottish Government has made it clear that it will not increase the 0.5Bn already allocated. Interestingly, Iain Gray has stated that Labour would take the same line.
So the citizenry of Edinburgh will have to cough up 1.5Bn instead of the 0.06Bn originally expected.

Both TIE and Edinburgh Council are behaving like rabbits caught in headlights. They see the oncoming disaster, but can't decide which way to run.

Cancel the trams.
Convert the work done so far to improve the road system in Edinburgh. Turn the off-road part into a relief road to reduce congestion at Roseburn and Corstorphine.

I know some will regard this as heresy, but trams and trains are obsolete for Scotland's internal transport needs.

I can't imagine how difficult it is for the SNP to not point and say "told you so". They knew it would end up costing much more than the estimate, hence why they agreed the scheme could go ahead only if any overrun costs were not met by the taxpayer. The public knew this too, as I think we all know fine that companies knowingly under-estimate their costs when bidding for public contracts, safe in the knowledge that the taxpayer will pick up the tab when it overruns. It's just a shame the other parties haven't cottoned on to this fact - it's understandable in Labour's case, since they still don't understand why PFI is such a bad idea, but you would have hoped the Tories at least would have gotten the message.

It's interesting that Audit Scotland were the ones who initially told the SNP that the project could indeed be completed under the original budget, even though we all knew fine it couldn't. What's the point of Audit Scotland if they can't even get something this obvious right? I have absolutely no evidence to back this up, but I wonder if Audit Scotland are filled with the usual jobs-for-the-boys Labour cronies?

I actually disagree that the Government should step in. I think the line should be left as it is, as a permanent reminder of what happens when governments give public contracts to companies without properly scrutinising their projected costs. The Parliament Building should have performed this task, but of course, because it was completed eventually, people tend to forget that the budget shot up from £10-£40 million to over £400 million.

Although that still wouldn't get the message trhough to Labour's thick skulls, since they still moan about GARL being cancelled.

I'm red faced with shame for my city. Edinburgh, whatever did you do to deserve this?

However, as the project is BOTH so far over budget AND so far behind schedule, perhaps he should have also suggested sacking those who agreed the contract in the 1st place.

I totally agree Joe.
I've just dug out from my cuttings a letter from me which The Scotsman published in June last year.
It ended "In my view, any further over-run should be charged to the councillors and council officials who are pursuing this folly".

Trenchant points from Doug Daniel too.

We should not forget that this project was pushed through by the combined forces of the opposition parties at Holyrood against the wishes of the SNP minority government.

The problem now is that nobody wants to accept responsibility for this project, but equally nobody wants to be blamed for its failure.
Hence John Swinney uttering sweet nothings about hoping to bring the project to a successful conclusion.

No. The SNP should stick to their guns, and stop this folly in its tracks.

They should have been cancelled Hamish but I read somewhere recently that it would cost more to cancel than to complete.

They're certainly not needed. The bus service in Edinburgh has always been excellent - at least when I've visited.

What interesting comments Doug and I see where you're coming from about leaving it as it is.

I was hearing from a friend in Glasgow that Labour is saying they'll resurrect GARL if they get in in May.

The Edinburghers wanted it Dram. So we were told.

I think some of those who agreed the contract have since jumped ship Joe and since then a series of other 'experts' have been at the helm.

I have no idea if it's true, but I was told by an engineer in Edinburgh that the problem was the construction company were told the gas and water pipelines were buried x feet underground and therefore tracks could be safely laid without the vibration from trams affecting anything. When the foundations for the tracks wer dug, it was discovered that the pipelines were far, far closer to the surface and the vibration from passing trams would burst water pipes and shatter gas mains.

All the hoo-ha since the project began has been about who is going to payfor the pipes to be re-laid at the proper depth.

I think that may be reasonably true Alan because it's common knowledge the main problem is to do with extra work concerning utilities. I vaguely remember that had to be done in Leith - re situating pipes. It seems a decade since this all began.

I'm torn between the waste and the opportunities.

I think Edinburgh will have to finish the bit between the Airport and Haymarket and use it. Maybe if the economy improves the network might be extended? Cities who have put in trams have done well.

The utilities under the streets seem to have been the problem.

Does anyone remember the scheme advocated by I think the Labour/Liberals of diverting the Edinburgh-Fife rail line to under the airport and building an underground station?

The gas & water mains will have been laid at the correct depth - 750mm cover beneath roadways as per HSE guidelines.

Water is laid lower (to minimise risk of freezing).

Those depths have been agreed & known for at least 50 years.

For any organisation / expensively-paid-consultant to now suggest that is a 'new' problem is in dereliction of their duty.

I'd agree with you Strathturret that link is the most important.

Don't you think Edinburgh was doing well as it is? Do you really think having one tram line will improve the city?

Aye I do remember that and credit to the SNP for knocking that one on the head.

Joe, if my memory serves me reasonably, I think Alan means that prior to BBS taking on the contract they were told the utilities were that depth in many cases and they tendered using that information.

Edinburgh council and TIE had had the routes examined by 'experts' who said that was so, but when BBS started the works they found that wasn't so and they were having to reposition much of the utilities mains.

So it's not a new problem, it's been a problem since the start. The tender gave incorrect information upon which the contractor bid. The contractor now wants the extra work to be paid for.

Calum Cashley is the expert. He knows all the ins and outs of this, but that's what I see as one of the main problems.

What irks me is while everything is at a halt people are still getting paid. The council and TIE don't seem to care about throwing money away like this.