Fuel Increases Are Only The Beginning 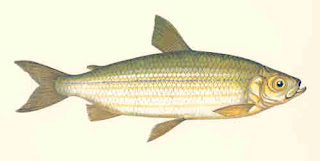 The vendace (pictured) is now Britain's rarest fish and was only ever known as a native species at four sites: three in England and one in Scotland.  The declining populations are thought to be due to introduced species that have used the native vendace as a food source and also due to pollution.  It is one of three species of whitefish in the UK. More information here.

The Independent reports that fish from the Lake District will be moved to cooler waters in Scotland under radical plans - which will be unveiled this week - aimed at coping with climate change.

The first of seven of more than 100 reports by government agencies and utility companies will set out how Britain needs to change to cope with hotter summers and wetter winters.  Officials say the studies are needed because levels of carbon emissions mean climate change over the next four decades is unavoidable.

The dangers to wildlife have triggered the most extreme solutions: the Environment Agency is poised to catch and transfer thousands of vendace and schelly, both freshwater white fish, from the lakes of Cumbria to Scottish lochs.

Scientists warn higher temperatures and lower rainfall in summer will lead to lower river flows and rising water temperatures.  As a result oxygen levels will fall.  "We may also need to reintroduce species to re-colonise stretches where fish have died."

The decline in eels in the past 30 years is also, in part, due to climate change.  The Environment Agency doesn't mention the size of the 'part'.  The devil will be in the detail of their report I trust.

Other climate change adaptation reports which will be released this week include those by National Grid, covering gas and electricity, the Trinity Lighthouse Authority, the Highways Agency, Network Rail and Natural England.  The DoE, Food and Rural Affairs says: 'the reports are the first step in preparing a nationwide plan in two years' time.'  I read that as 'the reports are the first step in hiking up domestic taxes'.

Malcolm Fergusson, the agency's head of climate change, said: "Climate change is one of the greatest challenges facing the world today. We are beginning to feel the effects in the UK. It's important we understand how this changing climate will affect our lives and the environment.
"The Environment Agency is at the forefront of the fight against climate change, through our work as greenhouse gas emissions regulator and our lead roles on managing flood risk and water resources. But we are also on the front line, helping communities and organisations to be ready to face the consequences of more extreme weather."
There's no turning back now.  The UK government is hell-bent on draining each and every one of us of every penny.  If you think the increase in fuel prices is excessive remember that is only the beginning.  There's worse to come.  Far worse.

I see that 'smart meters' will be the next billion pound scam to be foisted upon us in the name of defeating 'climate disruption'.
In reality just a little spy in the house monitoring when we eat, sleep, go on holiday etc.... They know everything we do when we're out and about but weren't sure what we got up to in our houses. The smart meters will provide the final part of that puzzle.
And the info available to anyone with the money to buy it.
Oh and another rf radiation hazard to boot.
There was a guy from SEPA on Newsnight Scottish Labour last week still droning on about rising sea levels. He was given free rein to talk nonsense with no dissenting voice asked for or required.

As I have just commented over at Anna R's place, I always knew there was something fishy about this global warming claptrap!

I didn't realise 'Climate Change' was so geographically sensitive that by moving a few fish 30 miles north - where we are to assume 'Climate Change' hasn't yet reached - all will go swimmingly. Still, I suppose Mr and Mrs MacPike of Lochmaben will be looking forward to a tasty new dish - Vendace a la Warmiste.

It's a lot to deal with isn't it... rising sea levels and falling loch levels... so many problems and so little time. I'd like to know more about these smart meters they want to install. I wonder where they will put them. Kitchen, parlour, drawing room, bedroom, bathroom? You never can tell with the Tories.
Despite their protestations to the contrary they seem to be fond of price increases. Everything has gone up by far more than inflation in the last few months, and I’m starting to consider that it might be more economical to run my car on Malt Whisky. It will soon be cheaper.

When you have politicians that go along with each new fad (Global warming), then they will continue to extract our money and spend it in reckless ways.
We need our MPs to think for themselves rather than chase votes, or curry favour vested interests.

Successive governments have form on green taxes. The Air passenger tax was introduced by Ken Clark and then hiked up considerably by Gordon Brown. Heralded as a "Green" tax, it was and is no such thing, it merely goes into the treasury.

What is most unjustifiable is the tax on tax on tax angle. Why, after paying tax on income, do we put up with paying fuel duty which has VAT applied to the Duty?

This is a tax on industry and on work because largely, vehicles are needed for this purpose.

Little too is said about the travesty of the importation of tiny vegetables, air freighted from The Gambia etc or indeed why potatoes grown in Lincolnshire are shipped thousands of miles around the country in the name of "logistics".

I cannot understand global warming as a concept, not the least because people are not interested in data but in hegemoney. What I can imagine and am certainly interested in is the way we allow big business to get away with animal cruelty, massive wastes of fuel and increasingly, food that is not food at all but a mixture of chemicals. So there are two sides to the story.

We do have industries that are struggling, such as the fisheries, and I do not see examples of the Westminster government doing anything to help them. Hauliers, especially small firms, are going to go bust. That is not my opinion but that of the industry itself
http://www.roadtransport.com/Articles/2011/01/07/137757/Wincanton-speaks-up-for-smaller-hauliers-over-fuel-hikes.htm

This helps a bit..

and this is a funny must listen to...

" Little too is said about the travesty of the importation of tiny vegetables, air freighted from The Gambia etc"

I always used to think along the same lines but evidence suggests that importing fruit and veg from warmer climes actually makes sense environmentaly. Saudi for example spends a fortune on desalinated water to help grow wheat and has now accepted that it's cheaper and more environmentally friendly to import it from abroad. Similar cases can be made for 'exotics' that we try to grow in the UK but which can be grown cheaper and quicker in their native countries.

Sorry first link had " at the start for some reason.
Try this..

If a big one in Iceland goes up and makes us all a lot colder they will have to move the fish back again. Are the fish covered by travel insurance?

Funnily enough RM I was discussing these with a friend earlier. She lives alone and feels she'd save money on utilities if she had one.

Thankfully I missed that Newsnicht 'special'.

I beat her by a few minutes though. :)

Earlier I contacted a fisher friend of mine to ask if he knew anything about vendace Clarinda as he's fished all over the UK. Awaiting response.

Note in the first link that the blame on its decline is to do with the introduction of other species which then have used it for food. That comment is completely disregarded by the warmists of course.

More and more folk are commenting on the rising prices Tris. I tell them to contact their MP because it's only by voicing an opinion will any of them take notice. But of course we need millions of us to do it.

Sadly JJ I don't think we'll ever have free-thinking MPs ever again. Once they're elected the first thing they think of is feathering their nest.

Another unjustifiable tax is the tax on pensions WW. The money we put into pensions was initially taxed, then when it's returned to us it's taxed once more.

I now use a local farm shop and am finding I can eat well returning to nature's clock. Root vegetables in winter and much more in summer. I don't miss food which you know can't be at its freshest because it's been flown round the world.

It must be a nightmare running a haulage company. Many good small businesses collapsed at the last hike.

Thinking about Iceland and things north of here Demetrius, isn't it strange there has been no mention of any damage from last year's volcanic eruption? Of course they can't tax a volcano.

If Global Warming causes the same amount of flooding it's been blamed for in Brisbane, those fish can swim to safety without any human intervention.