A Shame Which Must Be Set Right 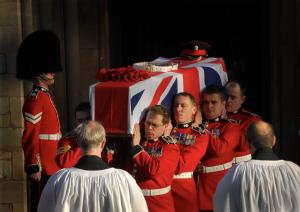 Sergeant Matthew Telford, 37, of the Grenadier Guards, died in Afghanistan as a result of an attack from what was described as a rogue attack from an Afghan policeman who opened fire on the compound in which they sought respite.  Four other British soldiers were killed in the attack and all were acknowledged as being 'brave and courageous' by our then Prime Minister Gordon Brown.

Sgt Telford was promoted to that rank in June 2009 but in November last year he was killed.

His wife will only receive a Corporal's pension because Sgt Telford had held the rank of Sgt for less than a year.  He was killed on active service whilst wearing a Sgt's stripes and operating as one.

This 'flaw' in the military pension system strikes a nerve with me.  I know of someone - a ranking officer - who was promoted and was operating in Ireland during the troubles as a Major, having been promoted 10 months before.  The man had served in the army for over 30 years with a distinguished service.  Sgt Telford's record was similar.

When my friend was back in the UK for a long awaited week's leave, he had a heart attack; in fact he had two in one day and was fortunately enough to be admitted quickly to the local hospital.  They saved his life but not his job.  He didn't mind, or his family, because they were happy to have him alive.  Sadly, less then 2 weeks later he succumbed to a third attack. His widow was given her share of a Captain's pension because her husband hadn't been a Major for over 12 months. In 1981 the difference in the pension was over £2,000 a year.  Her husband had been working as an 'acting Major' for many months prior to his official promotion.  Being an 'acting' rank counts for nothing in pension speak.

What I can't discover was if Sgt Telford was in an 'acting capacity' prior to his promotion but, I do know that in conflict situations that doesn't occur for long.  The military want their chain of command to be strong and those in 'acting' promotions may not hold the same authority as the accredited rank.

I'm unsure if Sgt Telford's promotion was announced in the press but I do know my friend's was in the early 80s.  It looked impressive at the time seeing his promotion in print after the months he'd spent as 'acting Major'.  This is another way our politicians - who are responsible for MoD websites - to opt out of taking responsibility for all they offer new recruits on their website.

Why should Sgt Telford's widow be left with a reduction in her due pension when none of the other services would tolerate that for one minute?  Can you imagine the police, fire service or ambulance service allowing this insult?  Of course not.  But our military do not believe in unions and I very much respect that.  Believe me, I've been weary over the years in my attempts to bring the inconsistencies which exist for our armed forces and other public services.

If you feel they deserve better, in the honour of Sgt Telford, I would ask you to sign this petition.

If you're in doubt, please think about these highly paid public servants who are provided with golden handshakes and pensions which are equivalent to what many earn in a lifetime.

I doubt if Mrs Telford is concerned about the money she will received for the rest of her life, she would much rather have her well-loved husband back.  It's up to people who are unemotionally involved to help right this wrong.
Tweet
Posted by subrosa at 17:52

With all that is happening in Afghanistan and all his waffle over looking after 'Our Boys' Cameron grate idea is a 'Happiness index'.

Niko, no poltician respects our armed forces. They know these people do their jobs out of a desire to protect the UK.

Thanks for highlighting this as I was unaware of it.

Now signed. Thank you for bringing this to everyone's attention. It's disgraceful.

Hi SR, thanks for the head-up.
Signed.

I'm not at all surprised by this SR it appears to be a mind set in the establishment mechanisms of this country. Example; merchant sailors during ww2 had their pay stopped when the ship was sunk (right down to the hour it happened)...nice eh? Or in the case of the RAF if you could fly a plane but hadn't gone to Uni (even at the height of the BOB) you could only start out as a flight sergeant. So being miserable with positions / wages / pensions is endemic. How to take the biscuit:- take one keen young man / woman, train them, equip them (usually with second rate stuff) send them to fight our enemies, then bugger about with their terms and conditions to save a half penny. Oh and another thing, it’s helps if you make daft jingoistic statements like “land fit for hero’s” or “our lads in Afghanistan are all hero’s” it helps cover up the guff that’s going on.

I think this needs to be put about as widely as possible, so I have linked to it from my blog here. It all helps, I guess.

It is the least I can do Dioclese.

Aye Dram, I've heard of many horror stories. It's all in the small print of course and it's nigh impossible to lay hands on the 'terms and conditions' if you're a civilian.

Again, thank you Richard. Indeed, it all helps.

Thanks for that, subrosa. I remember reading about this kind of situation in the past but did not realise that it still went on. I cannot understand why, if some-one is "acting up" that they should not enjoy the same conditions as those in a substantive role. After all they are doing the work usually carried out by those in that substantive rank.

Obviously, the politicians concerned and the MOD should be the subject of a public inquiry to sort out these and numerous other disadvantages placed on our armed forces.

Thank you for bringing this to our attention - duly signed.

I am wondering if MPs have to wait for a year before they are entitled to an MP's pension should they die in service. I doubt it, but I do not know.

I also doubt that, if an MP becomes a minister, a cabinet minister or indeed a prime minister, does he have to wait a year before elgibility kicks in.

Is there an historic reason for this? Is it true for the most senior ranks, including the ones who wander about Whitehall, looking for a knighthood or a lifetime of three hundred quid a day in the posh old folk's home?

The only defence I'd put up for our Armed Forces is that in my experience the 'acting' rank is sometimes necessary because of the nature of the job. Military policemen for example might not have all the necessary qualifications to be a 'full screw - full cpl rank' for example but may require this rank to enable them to carry out arrests. Regular troops may take 6years to get to cpl but a policeman would be an acting cpl after basic training. Are you saying that the cpl with 3 months service sadly kia is entitled to a cpl with 6 years service pension ? I'd say yes myself but it's not the way the forces think or act.
It was the same on operations. An 'acting' sgt might be required because of the nature of the task ( guard commander etc ) but might not have done all the courses back at base.
The acting sgts and cpls never got their full pay until all the courses and every box was ticked back at base.
Just my experience.

I think the year applies to all ranks Tris and I agree with you. Politicians will of course get full pension even if they've only been in the job a day.

Yes RM, that's how I understand 'acting' works but Sgt Telford appears to have been promoted to full Sgt therefore he'll have ticked all the boxes before that.

Any 'acting' personnel know they won't receive that rank's pension.

What does bother me is when someone is promoted they have to wait a year before their pension is raised to that level.

As RMG has pointed out, the devils always in the detail.

However that can easily be sorted out by the application of empathy and common sense. Does the case concern someone who was active and had earned the rank. Had the person concerned fulfilled the responsibilities the rank required?


A yes to these condition should be enough, anything less is just bureaucratic penny pinching.

SR. The whole 'acting' system should be overhauled.
We used to have 'acting unpaid' and 'acting paid'. Or if you were aircrew it was always 'full sgt' or whatever right after training.
All very confusing and discriminatory.
It would be fairer just to give the full rank and entitlements straight away as I remember people being ' acting unpaid' for years. Taking the strain of the extra duties with no rewards.