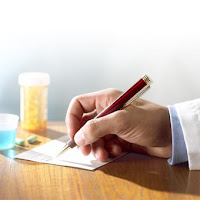 I would prefer to contribute something towards any prescriptions I may need but the Scottish Government has decided prescriptions will be free from April next year.  Since coming to power the SNP government has reduced the cost of prescriptions from £8.85 to £3.  Removing the charge altogether is expected to cost around £40 million.

Ms Sturgeon said: "The prescription charge is a tax on ill health that Scotland's poorest families can ill afford. Some have argued that in this financial climate, we should not go ahead with our plan to abolish prescription charges. Well, times are tight and we believe that the last people who should be paying the price of the current economic mess are the sick."

Yet the Taxpayers' Alliance campaign manager Fiona McEvoy complains that this is the latest in a series of moves which disadvantaged English taxpayers compared to their Scottish counterparts.

Does Ms McEvoy not realise Scotland is, very fortunately, not attached to the English health service?  We presently have a government which wishes to use our allocation of the UK budget in the way the people want it spent.  The SNP government show they listen to the people and it's up to the English themselves to lobby their politicians for a similar policy.  It's shameful that English patients with long-term conditions are not given free prescriptions yet millions is spent funding fake charities and some dubious overseas projects.

My suggestion to Ms McEvoy is to use the example of the Scottish Government as leverage with your political contacts in England.  Oh, while you're talking with them, suggest a freeze on council tax.  We've had a freeze here for 3 years now and hopefully it will continue for another 2 years.  It's not how much money you have, it's how well it's used.

In this case the Scottish government are creating policy which the majority support then finding the finance to support it.  That's the way it should be, instead of the present 'what can we do for the money' attitude at Westminster.  Wednesday's announcement concerning our security requirements will be a fine example of that no doubt.
Tweet
Posted by subrosa at 20:51

As there's no such thing as a 'free' meal, or, prescription, who actually pays for the 'free' Scottish prescriptions?

Is it all UK taxpayers (including the English who also pay for their prescriptions)?

Or, do the Scots have their own ring-fenced taxation that all north o' the border contribute towards all their own prescriptions?

I don't know the answers to those questions, but I can take an educated guess.

I wish you all luck with it - though there may be trouble ahead.

A source north of the border tells me of a conversation she had with a neighbour this week; the woman was pleased that her younger grandchild had just been accepted 'on the sick'.

It seems he had previously been fractionally under the weight which would qualify him for disability benefits on grounds of obesity (already being claimed by his elder brother) so the family had united to encourage him to put on the extra few pounds and ask for a reassessment.

Recognising that there were few or no prospects for employment in their area, the boy's mother and grandmother were pleased that he and his brother were now 'taken care of', hopefully for life.

This may be an unusual case, but the future healthcare costs for the next generation may far outstrip those of their active and healthy grandparents.

I'm amazed we pay 'disability' benefits to the obese. It's a 'lifestyle choice' for the fat buggers, that is self-perpetuating.

Withdraw those benefits, and let 'em get some exercise called 'work'.

The money comes out of the Scottish budget Joe. Nicola Sturgeon says our NHS is ringfenced so it may be paid for out of NHS savings.

If English folk think they pay for my prescriptions then I pay for theirs. That's fair isn't it.

We're having to contribute to the Olympics and for me it's in another country. That's not a complaint just a fact.

Jings Macheath, I'd no idea the obese received disability benefits.

There are people on life-saving steriod treatment who do gain vast weight, but as Joe says it's usually a life-style choice.

That story is concerning.

Healthcare all over the civilised world is costly. Our results are poorer than most European countries. We need to pay more into the system, but before we do, we need to revamp it.

"We're having to contribute to the Olympics and for me it's in another country. That's not a complaint just a fact."

For me, we're having to contribute to the Olympics, and that is a complaint.

Well Sr as someone who takes a tablet daily that is considered a "preventative" (in other words it saves money in the longer term - no ops etc) I don't qualify for any help so I have to pay the full monty. Now couple that with labour (and I presume the ConDem nation crew) fixation with taxing everybody to the hilt and me being at the lower end of the money tree, the SNPs help in reducing the precription charges is MUCH apreciated. Joe, the SNP in Scotland choses to spend a share of its hand out on helping folks like me. Don't blame them if they do, rather direct your snide comments about tax to your parliamentarians and ask them what wall are they are pissing the money against? Start with, Afganistan, Nuclear Squibs, Aircraft carriers, the city of London and the rest of the greedy tossers that that have ruined the economy. And while you are at it say a little prayer tonight that god allowed this country to float on an oilfield. Otherwise Joe, we'd realy be in the grubber!!

I understand Joe. Many feel like you. It's London's games, our sports folks are like any others, visitors.

I take a tablet every day too Dram and since I became a pensioner,it's made a difference to me that I don't have to pay. Pensioners haven't paid for some years here now.

That's my thoughts too. If English politicians want they too could have a policy of 'free' prescriptions and save money elsewhere. I won't list where as I'll be here all night.

Congratulations to the Scottish Government.

At last someone has actually seen some sense (England please note) and realised that it has, for far too long, cost far more to collect prescription charges than is actually obtained in income from them.
It has cost the taxpayer in Scotland considerably more for all the NHS and governmental departments that collate, count, check and administer NHS prescription charges, than the £40m obtained from patients – all that cost for bureaucracy – and we haven’t paid for a single aspirin.

@ Macheat
Sorry, but, ‘obesity’ is not recognised as valid criteria by the Department of Work and Pensions in granting disability benefit.
Either for children under 16 or for adults.

John, you've reminded me of a pharmacist friend I have who used to say exactly that. He used to complain about the lack of control when the staff knew plenty people who could afford to pay didn't. He was very vocal about the system and his answer was to make it all free. He's now getting his wish.

Well... we pay NI for the NHS, should we be paying for prescriptions too - in any part of the UK?

I don't have any prescriptions because I never go to doctors. At my age they'll find something wrong with me and as I smoke and drink and eat all the 'evil' things they'll be legally obliged to.

Even so, if I live long enough, something will go wrong, and having paid NI all those years I'd be annoyed to find I have to pay for the treatment I've already paid for.

Caviar Woman is right to scrap prescription charges, because no part of the NHS, anywhere in the UK, should be charging anyone who has paid NI. They've already paid.

Those who haven't, well, as Hancock once found - if your 'stamp' isn't paid, you don't get it free.

Sadly, that no longer applies.

JRB:Sorry - should have put in some quotation marks; the story came to me indirectly - it wasn't clear whether there was an arbitrary limit or whether the family, having seen one son qualify, thought they simply had to get the other one up to the same weight.

I understand both boys (not surprisingly) have developed other health problems, so it may actually be the incipient diabetes or occasional breathing difficulties that were the deciding factor - I'm only passing on the impression the grandmother was left with, a common one if town gossip is anything to go by.

Incidentally, SR & Dram, re free prescriptions; I too take a daily tablet without which I would have long-term serious problems. However, my particular condition qualifies for prescription exemption - don't ask me why.

Since the medicine I take is a cheap generic costing far less than the prescription fee but not available over the counter, this seems not unreasonable to me.

However, though I'd be happy to pay when I need something unrelated - eg. antibiotics - it causes all kinds of administrative problems if I try to give them any money.

Exempt for one condition - exempt for all, it seems, like it or not.

As John says (he's JRB) Leg-Iron, the administration costs of the present system are a nightmare and costly. How do they check on people? I think at present it's a random checking system which is really more of a token gesture rather than anything else.

Have you ever heard of anyone being in court because they've been claiming for free prescriptions when they shouldn't?

Unfortunately women seem to have more health problems than men whose problems start in their 50/60s. You're on that list now LI. :)

I wouldn't mind paying a bit either Macheath. In fact when I did pay I had to pay double because some pen-pusher decided my tablets contained two chemicals.

Ms McEvoy and the Tax-payers Alliance have a general problem with a lack of reserch, before opening their mouths to "advise" what should be cut. Why let the fact that our NHS is administered & run by our own elected parliament (as opposed to the one down the road) get in the way of another of their grieviences...

I think the TA is English Allan. Wasn't it set up by tories? Mind you, I don't disagree with them all of the time.