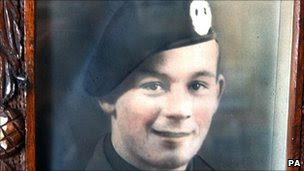 Bill Millin died last week aged 88. He was commonly known as Piper Bill and was the personal piper to Simon Fraser, the 15th Lord Lovat, commander of 1 Special Services Brigade at D-Day.
Many years ago, when I attended the Beating of the Retreat at Edinburgh Castle, performed by the Scottish schools pipe bands, I first heard the name Bill Millin. My informer was an ex-soldier sitting on my right who initially asked if I'd ever heard of Piper Bill. What a spell-binding conversation followed. The raconteur had been part of the D-Day landings and he spoke emotionally of hearing Bill Millin's pipes droning on and on through the hellish noise of battle - gunfire, screams and the yelling of orders.
"At one point," he said," being English I didn't appreciate what I thought was really more of a racket rather than music. After some time Bill must have stopped for a breather, because I remember holding my breath and thinking play, go on, play again. We need to hear you."
On radio, some years later, I heard Bill Millin describe the day when he piped the invasion forces onto the shores of France; unarmed apart from a Sgian Dubh. When his commander requested a tune he struck up with Hieland Laddie and then, when a further request was made, he decided to walk up and down the beach blasting out his repertoire over and over again.
He recalled his worst moments were when he was among the wounded. "To feel so helpless was horrifying".
The War Office had banned pipers from leading soldiers into battle after losses in the Great War had proved too great. “Ah, but that’s the English War Office,” Lovat told Millin. “You and I are both Scottish and that doesn’t apply.” On D-Day, Millin was the only piper.
His name became famous when Cornelius Ryan's book The Longest Day was adapted for film. In 1995 he played the lament at Lord Lovat's funeral and he donated his pipes to the National War Museum in Edinburgh. The mayor of Colleville-Montgomery, a town on Sword Beach, has offered a site for a life-size statue of Mr Millin opposite the place where he landed on D-Day. This is due to be unveiled next year.
RIP Bill Millin. You gave hope to many on that day and went on to have a most fulfilling life but always remembered the many who were not so fortunate.
source
Tweet
Posted by subrosa at 20:44

Was only at Pegasus Bridge last month with some veterans. One of them recounted about when Bill marched across the bridge and the German snipers didn't shoot him because they thought he was crazy!

Thanks Anna. That's most kind of you.

It did take some courage Smoking Hot. I've heard he was a very talented pipe too.

This is the stuff of legends and send a tingle down the spine, gives you goose bumps and great pride in such brave men. How would today's youth cope in such situations? How would I have coped too - I don't think I could have been so brave.

Derek, we all have the ability to face adversity. It just depends how much belief you have in yourself at that moment.

The youth of today aren't hopeless. There are those who would be brave enough I'm sure, although I detest the thought of them being in such a situation. Some face adversity in the likes of Afghanistan on a daily basis. It's called 'duty' for them and they don't like being called heroes.

What a beautiful Story, Subrosa, I always tear up when I hear the beautiful pipes.

May dear Piper Bill Rest in Peace, he's playing his pipes in the choir of Heaven.

RIP
My father was a 19 year old lieutenant with 45 Commando landing with Lovat's Brigade that day. He knew Bill Millin a little. He is still going strong, than God.
What brave and good men.
Gildas

They were indeed brave and good men. Pleased to hear your Dad is still going strong. I suspect he still has some contact with his old colleagues.

May he continue to keep good health.