There Should Be a Higher Minimum Age for Elected Politicians 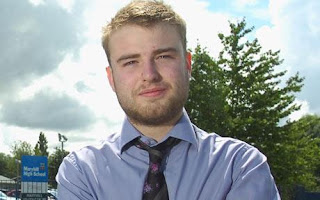 I've always decreed that politicians should be at least 30 years old before going into any form of government. There are exceptions, as there are in any profession, but 30+ seems a reasonable age for anyone to have grasped the basics of life in our country.
For some reason - and I'm still completely baffled by it - the electorate of Newcastle Borough Council, Staffordshire in May decided to elect Kyle Taylor (pictured above), who is 18 years old, as their local councillor.
Mr Taylor is objecting to the head of his school, Dr Alan Jones, Maryhill High Media Arts College, expelling him on the grounds of his absenteeism. Mr Taylor denied his poor attendance and said he had been told to leave because of six hours he had missed since being elected. He had attended meetings and inductions he insisted and said it would benefit residents of his ward if he completed his education.
However Dr Jones said that councillor Taylor's absences had been going on for two years and was below 50% in some subjects since March. Councillor Taylor intends to complete his education elsewhere.
But that's not all by any means. Days after being elected, councillor Taylor was charged with assaulting his girlfriend at Stoke station on Sunday 25 April. He has pleaded not guilty to common assault and is due to face trial at North Staffordshire Magistrates Court on 18 August.
Following his arrest on 25 April, he was suspended by Stoke-on-Trent North Constituency Labour party. He later won the ward by 82 votes.
What made the people of his ward vote for someone who allegedly assaulted someone? What is it within labour voters' mentalities that they can't see the wood for the trees? How could anyone vote for a school pupil who is receiving a good salary courtesy of the taxpayer? So many questions and only one answer. Ignorance.
Surely this case shows that placing someone so young into a position of power could be dangerous. Not only to his girlfriend...
Tweet
Posted by subrosa at 21:02

Come off it. How old were John Profumo, Hugh Dalton, David Blunket, Jeremy Thorpe and many other politicians when they were caught up in scandals?

Gladstone was in his 80's when he was discovered trying to "reform" prostitutes!

It is unfair to paint all young people who wish to serve their communities with one brush, just because of the failings of one young man.

They elected a girl-thumping truant? Well, in Newcastle he probably fits right in.

Alwyn - nobody is 'painting all young people with one brush'. I have never hit a girl in 50 years and I know most young men nowadays wouldn't.

This one, this particular one, did. The drones still voted for him. Tribal politics - good, isn't it? Even the Cameroid won his seat despite already having gone back on his 'cast-iron' promise.

There must be a sensible limit on age for the people who are to run this country. Seriously, is someone who is at school (albeit part-time) really ready to discuss pensions and bus passes with a 70-year-old constituent?

Furthermore, what will the abused women think if they have to discuss their problems with a convicted woman-whacker?

One who might be younger than their own children.

Aside from age, a criminal conviction should automatically disbar anyone from politics. We have enough criminals in government as it is, without making it an entry requirement.

Correction - he's not convicted. Now that he's an MP, he won't be.

There is a minimum age for politicians - it was recently reduced by Labour from 21 to 18.

So the problem isn't the minimum age, it's the fact that it's completely inappropriate.

30 sounds too high to me, and 21 still on the young side, so something in between.

I completely disagree with you Alwyn. This is nothing to do with scandals - although I understand assault is a criminal offence.

This is to do with what a schoolboy has to offer an electorate. He has little knowledge of life at his age.

He could serve his community in many other ways rather than being paid a handsome chunk of taxpayers' money, gain experience then have politics as a career.

In fact, he'd have been far better off improving his school attendance for the past 2 years.

I must apologise insofar as my title is misleading. It should read a 'higher' minimum age.

No he's not convicted, but now he's a councillor (not MP) you can bet the worst punishment, if he's found guilty, will be a slap on the wrist LI.

This country just drops deeper into the mire.

At least the likes of Profumo and others had some substance and cunning to their actions. This bloke appears to be a chancer. No, he is a chancer.

Well said wildgoose and of course you're correct.

You mean around 25? Isn't 25 far too young to be taking an MP's salary? I certainly think so. Salaries should be earned and a 25 year old should start on a much lower scale. You know - the old fashioned idea of increments for experience.

SR - I have to say I'm disappointed (rather than shocked) by the electorate's choice but I can't agree with your conclusions. Why shouldn't I be permitted to vote for a 29 year old? Or indeed an 18 year old?

I agree that people do tend to become more suitable for political office as they get older, but I think you're over-playing the role age plays. Very few people turn from unsuitable to suitable. And those who were already suitable don't, I think, become very much more suitable than they already were.

Ultimately, though, an 18 year old is an adult. They are adult enough to have sex and children, to earn any other salary to which they are entitled, to pay their taxes and, crucially, to sacrifice their lives for Queen and country. They are not children and, accordingly, we are no better than them morally on account of being older. They must have just as much right to stand for Parliament as anyone else.

If the electorate vote for the odd unsuitable one when they shouldn't... well, that's just something we have to accept as part of being a proper democracy.

I presume the boy was elected because he was standing for the Labour Party.

It's a well-known fact that you could put up a rusty bicycle and it would get elected as long as it had a red rosette on it.

My own view has nothing to do with minumum age directly; I think all candidates for elected public office should have ten yearss' experience working in genuine wealth-creating business before they would be allowed to stand.

And wealth-creating business as defined would not include anything funded, either directly or indirectly by the public sector or any of its poodles (ie state education bodies, fake charities, etc).

I do realise that this would disqualify, in one stroke, 95% of the current House of Commons and probably 60% of all local councillors including 90% of Labour ones.

That is a feature, not a bug.

I certainly see this differently to you IPP.

My idea of age was to do with maturity on average, then there are some 60 year olds who aren't any more mature than 30 year olds, I agree.

In this particular situation it's wrong that a supposedly full-time school pupil should have been permitted to stand for the labour or any other party. So he's ripping off the taxpayer twice. Once for an education which he only bothers to use half the time and his councillor salary.

Right enough, it's the people of Newcastle who decided, nothing to do with me. You reap what you sow.

"What is it within labour voters' mentalities that they can't see the wood for the trees?"

The expression "Thick as a plank" springs to mind.

I agree with you, but it should not be a simple age limit. There should be proof of contributing to society as well.
It could be based on National Insurance record. This would be something like five years contributions. It would stop people going straight from University into politics, which seems to be one of the biggest problems we have.
Need to work out a way to make sure that those who make our laws have some knowledge of work.

Joe, I can never get my head round any fellow Scot being so thick. Maybe when I'm in my 70s I will. Only 6 years to go!

"My own view has nothing to do with minumum age directly; I think all candidates for elected public office should have ten yearss' experience working in genuine wealth-creating business before they would be allowed to stand".

"It would stop people going straight from University into politics, which seems to be one of the biggest problems we have.2

Two fine sentiments that I wholeheartedly agree with. well said both of you.

Well said Rob. But since they decided to make councillors salaried it's no longer a calling but just another job.

This chap's never going to get to university if he doesn't bother to attend school. Then again some university may have him. Education is a strange world these days.

Dram, I think my local council would empty if that was the qualification - 10 years in wealth creating business. There would only be the old stagers left and a few of those who already work in a public service department.