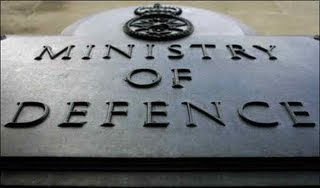 While there is much talk about the forthcoming defence review and where the cuts will fall, Russia has decided to rearm and is increasing its defence budget by 65%.
The spending boost is part of an ambitious £276 billion rearmament programme to re-equip its conventional forces between now and 2020.
Currently Russian defence spending remains well below US levels and their present equipment is dated. But why are the Russians investing so much in their military hardware during a global recession? Food for thought.
source
Tweet
Posted by subrosa at 09:42

I was recently on a course with high level Spanish army officers. They told me that the idea of a 'dated' Russian military was a 'dated' idea. He told me they were more advanced than pretty much most of what the rest of Europe had to offer..

There are some economic arguments for spending or arms but I think this is pure geo-politics. As currencies collapse and the umbrella that was the US is blown away by the wind, the world is becoming much more dangerous. Throw in the rapid decline of the US as a superpower and you can imagine all sorts of unpredictable realignments. That aside, Russia and Iran are closer than people think..

Some said the Cold War was over, I never believed it. What happens now? well Europe is virtually useless to the USA as long since all natural reources were sripped away, that really only leaves the people as a resource. The creation of the EU(SSR)wherein we the resource have NO rights voting or otherwise seems to suggest that a takeover by the Russians could be quietly and effectively made, they already control much of the gas/energy supplies we use here.
I presume thatre-armament would be to quell any popular uprising from a mostly unarmed populace.
Watch out for limited Nuclear strikes in populated areas/cities to effect a general clamour for protection and a subsequent hand over to Russian might.

That doesn't surprise me Alex. Some years ago I remember an army officer, who had been seconded to the Australia army for a short period, telling me Australia's equipment was far more up to date than anything we have in the UK.

I too think it's politics although it will also aid their economy if they do copy what they plan to buy outside their borders.

The Russians are known for their forward planning...

I'd agree Indyan, so much of Europe belongs to the rest of the world and we're told it's because we live in a global economy to stop us asking too many questions. Too late now for questions anyway because we're now seeing the answers.

Unfortunately in this world if you turn you swords into ploughshares then somebody will take your ploughs off you.

Russia has the US as its main military rival in Central Asia which also takes in Afghanistan and Iran and a resurgent China on its eastern borders which puts Siberia under threat.

It's always worrying to be in the middle of an arms race but I think that Russia is looking South and East rather than West.

Anyone who thinks that the Cold War was ever over is either naïve, misguided or barking mad!

Russia was always a great believer in defence in depth. Now that it's defence in depth, in other words, it's reliance on "client" satellite, zones of influence, neighbours to keep the baddies away from their borders are proving somewhat dubious value. Obama's little messenger bhoy's recent trip to Turkey will not have calmed down the Kremlin's fears, that's for sure.


Then again, all is not going smoothly with North American Incorporated's foreign adventurism so mibee a little bogyman distraction from their woes is called for.

Time to crank up the volume, methinks.

The 'Cold War' was an impressive achievement in terms of propaganda and thought control.

Basically, it was just a ruse to dupe poor bewildered taxpayers out of their money and re-distribute it upwards to the deserving wealthy shareholders of private arms companies and manufacturers.

When the USSR (stage hisses and boos please) decided to stop existing, US Government spending on its military budget hardly missed a beat.

With the pretext gone for its military keynesianism the state myth makers of America were hard put to come up with a plausible excuse as to why American taxpayers should keep subsidising the military welfare state for the rich.

Unlike the Yanks, the Ruskies rarely stray very far from their own borders or agreed sphere of influence, with their invasion of Afghanistan in 1979 being the exception which proves the rule.

This Torygraph story looks like the usual traditional stories disseminated in order to scare the public out of its money, and justify British Government spending on white elephant luxury goods the British public doesn't want and cannot use ie Trident.

all the best subrosa.

But Mazda, our politicians have told us it's over. They wouldn't lie to us would they?

Something's sparked this vast investment in hardware wisnaeme and just maybe the Turkey strutter's speeches were a small part of it. Bogeymen are good distractions right enough.

Maybe yes maybe no Joe but are we taken in by propaganda like this anymore?

It would be interesting to know how much the Russians have invested in hardware over the past 10 years though.

They're good scouts I have to admit. 'Be Prepared'.

Maybe yes maybe no Joe but are we taken in by propaganda like this anymore?
- I'm not sure how relevent public opinion is (if this is what you're refering to) when it comes to the government deciding British foreign policy, never mind domestic policy.

For instance, a majority of British people were against attacking Iraq or Afghanistan, but that didn't stop Westmidden/Whitehall from carrying out these war crimes.

Here is a few excerpts from our own Defence Minister on why the taxpayer needs to shell out vast sums of money on buying offensive military capability -
Liam Fox: UK military must keep war-fighting edge
BBC Politics
13 Jul 2010

Defence Secretary Liam Fox has argued for the UK having "robust and well-equipped armed forces, capable of intervening abroad whenever necessary".
He said the UK must not send signals which could be seen as lessening its commitment to engage with the world, or curtail an ability to respond to threats.
These could include nuclear rogue states, warlords and pirates, he added.
Outlining the terms of the review in Parliament last month, the defence secretary told MPs that the armed forces should not assume that future wars would be like the current counter-insurgency in Afghanistan.
There could be conflicts over energy and water, new threats from failed states and a nuclear Iran, and the return of state-versus-state conflicts, Dr Fox argued.

I love the assumption of Liam Fox that the US and UK Governments aren't failed states. Since when have these governments ever responded to the opinions of their own people on issues that matter? Generally, the public is excluded from political decision making.

There are also no bigger and more dangerious 'rogue states' in the world than the US and the UK which are guilty of the same crime as Hitler (of unprovoked aggression against Poland), but twice over, when the attackedd Afghanistan and Iraq.

Nuclear Iran - is a threat as real, or as phoney, as Iraq and its ability to attack the British within 45 minutes with its WMD.

Sorry for chuntering on.

Just to say subrosa, I'm not disagreeing with you or anything. I'm merely making a few general points.

ps
Just to say,
recently a rogue nuclear state hijacked and kidnapped British citizens in international neutral waters in the Eastern Mediterranean, subjecting them and their fellow ship-mates to beatings and a brutal mass-murder. With British military bases in Cyprus, the British Government was not in the slightest bit interested in carrying out its duty of protecting British citizens in such circumstances allowing its ally, Israel, to carry out its brutal international terrorist atrocity with impunity and immunity and approval.
See -
Israeli brutality and Mavi Marmara defenders' nobility
Scottish Palestine Solidarity Campaign
06 June 2010

The rogue racist nuclear state of Israel also likes to steal and forge British passports for use in its ongoing campaign of international terrorism. Again, to discourage such behaviour, doesn't require HMG to have a huge military budget. All it needs to do is stop supporting such states and such crimes - and stop carrying them out itself, on behalf of America, in the likes of Iraq and Afghanistan.

Joe you can disagree with me as much as you like.

I heard that speech of Fox's and really meant to do a post on it saying more or less what you think. What concerned me was the 'conflicts over energy and water' bit.

Yes, our behaviour in Iraq and Afghanistan has done a great deal of harm to our standing in the world. For politicians to ignore that is plainly foolish for our security. As for the Israeli question, neither the US or UK will say anything negative. Let's not forget they need the support of Israel and its friends.

Joe you can disagree with me as much as you like.
- Thanks subrosa.


As for the Israeli question, neither the US or UK will say anything negative.
- UK PM Dave did say during his current world tour at his gig in Turkey, that Gaza was a prison, thus joining the likes of Prof Chomsky on the question of Israel's international behaviour.

Although, it has to be said, during the same tour PM Dave did criticise Scotland before an American audience when he was in America (Scotland had recently released an anti-American terrorist from its prison system).

Then PM Dave moved on to criticise Pakistan before an Indian audience when he was in India (snide comment superfluous by now).

Such is Britian's foreign policy.
It does make a change though from it being full of vacuous pro-American Blairite soundbites. Now it's just full of Cameronian insults of foreigners. Brilliant!


Let's not forget they need the support of Israel and its friends.
- Without the support of the US Israel would be nothing.
It has an economy which is about 17th-18th in the world and which relies on a yearly $1 billion subsidy from the US to stay in buisness. This isn't power and influence but dependence, more like an addiction.