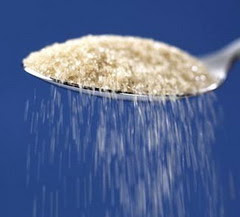 For some time now LegIron and other bloggers have warned that the smoking ban was only the beginning of the programme the Righteous have in mind for the population.
The smoking ban was tested in Scotland before it was applied throughout the UK. That was a strategy planned by Westminster and carried out by Jack McConnell, although he gets the credit for introducing it. He didn't introduce it, he piloted it here on instructions from his London masters.
Now it's the turn of Wales. Sugar is to be banned in all Welsh hospitals. The excuse is it has no nutritional SDHp benefit and poses a dental risk. NHS bosses have also been ordered to remove sugary coffee from all its vending machines. The guide lines from the Welsh Assembly recommend no junk food, including crisps and fizzy drinks in machines. Instead it suggests water and dried fruit should be sold.
Tea drinkers can opt for an artificial sweetener. An Assembly spokesman said:
“We are working to create an environment where it is easier for people to make healthy choices.”
There is no healthy choice. There's only one choice - take it or leave it. The Department of Health said it is unlikely to impose a ban in England. Note the careful wording. Similar statements were made about the smoking ban in England.
It's common knowledge sugar is beneficial to trauma and shock victims. Many people suffering these symptoms attend hospitals. More money for big pharma because if sugar is banned then chemical medication may be required. Will the Welsh protest? I can but hope. Would you like to know that NHS staff were banned from giving you a cup of strong, sugary tea when you were in shock?
source
Tweet
Posted by subrosa at 21:08

I'm waiting for the inevitable lawsuits years hence when it's finally established that artificial sweeteners have adverse effects on the human body.

Meanwhile we're stuck with 'Dried fruit good! Sugar bad!' - the rallying cry that has sparked vicious purges in nurseries and schools up and down the country.

I've just checked - a coffee with one sugar contains about 5g of sugar; a 25g serving of raisins contains 17.3g. So what's the healthy choice?

Unlike smoking, those who want to, just smuggle sachets (free at McDonalds) into the hospital.

Artificial sweeteners are chemical weapons, as is Fluoride in toothpaste, aimed at a policy of eugenics/ population reduction

Some people react badly to artificial sweeteners - I'm one of them. Would I be able to make a claim for damages if somebody in a Welsh hospital slipped a sweetener in a hot drink and made me drink it?

Hospitals are meant to make ill people better, not dictate their lifestyle choices.

First rule when ye hear a buzz in yer ears:- reverse it.

Don't you just love it when they "help you to make the right lifestyle choice".
Personally I don't add sugar to anything but I can see popular uproar in Welsh hospital canteens.

On the subject of Righteous cant, when introducing the idea of reducing the legal level of alcohol when driving "they" stated, 'there are no plans to reduce the level to zero,
at this stage'.
Really? So at which stage then?

The 'healthy' will say the raisins have natural sugars and the other is refined sugar Macheath. That's their argument.

However, I too wait for lawsuits about sweeteners. The Americans or the Canadians are onto it right now while we still think they're utterly safe.

Jings Joe, I'd have to buy a Big Mac for some I expect.

You're right Harry. As Macheath says one day someone's bound to legally challenge that.

Jeanne, it took me years to realise the sugar content of dried fruit. Then again, it's not something I eat regularly only very occasionally.

Mrs R, I'm quite sure you could as long as it was recorded beforehand.

I don't add supgar either banned, but occasionally I have a drink of squash, especially in the hot weather.

The 'no added sugar' type contains sweetener which makes me more thirsty so now I go with the normal. I must investigate the labels more thoroughly when shopping next.

Artificial sweeteners make me ill. i don;t use any and won't buy anything that has them. I also use butter, not the plastic yellow stuff in a tub, add salt whenever it suits, have never been tested for cholesterol and have no intention of doing so.

I have been an intestinal bacteriologist for a long time and now run a private consultancy and research business in gut health. I'm not someone running on fads and tinfoil hats.

If I ever wake up in a hospital I will check out at once.

Google Asparteme or whatevervits called that most sugar free drinks contain. Massive health risk for some!

Re sweeteners and the Righteous:

Years ago, a request for the Urchin's playgroup to provide diluted pure apple juice was shot down in flames by parents at the AGM, amid vociferous claims that 'sugar free squash is the best thing for our children'.

Interestingly, one of the toddlers concerned was on Ritalin and a further two had mysterious chronic stomach complaints.

SR - if you have gen on the US/Canadian situation, can we hope for a post?

You won't get to live forever but it will be so tedious that it will certainly feel like it.

It has been a fact for years that an unacceptable number of patients are undernourished while in hospital. This affects short and long-term morbidity and even plays a significant role in some mortality figures. Instead of faffing about with sugar - which may be the only half decent immediate energy intake some patients get - why not assess the nutritional status of vulnerable patients properly and provide the required nutrition and, more importantly, the nursing assistance to eat it. How many of us see uneaten food lurking at the side of frail patients beds - they could do with a 'spoonful of sugar'.
Sick and tired of these health 'education' prats who are incapable of working smarter but just make the rest of us work harder.

They don't like me either Leg Iron, so I'm another lucky one. If I remember rightly some contain formaldehyde.

I eat much of what I ate as a child: butter, salt (too much) and have no problems as yet with cholesterol. Only gut problems but you know about them.

Here's one wee snippet for you CD. So much about yet people still use the stuff.
http://discovermagazine.com/2005/aug/chemistry-of-artificial-sweeteners

Macheath, I'll see what I can do. Presently I'm making the most of the lovely weather in my free time rather than researching on here but when it rains...

Thanks Clarinda. I've just had an idea. Do you think I should post this link to the Welsh Assembly? For the comments of course.

Edward, In recent years I'm said to the younger generation I consider I've had the best of life on these islands. They look rather oddly at me then request an explanation.

A childhood spent as a child, a good education, the prospect of an exciting and well paid job if I worked hard enough and watching the progress of technology.

Now we appear to be at the beginning of a decline. Yes Edward, it will seem like a long tedious life in the future, especially when everyone is expected to work until 70. That's another story.

Clarinda - wasn't sure how else to reach you, but someone has left a message for you at my post on the Reel of the 51st.

SR, apologies for using you as a messaging service...

I followed the 'discover' link above and read this gem: Sucralose was discovered in 1976 by a graduate student at King's College London. His head researcher had told him to test some compounds, but he misunderstood and tasted them instead.

Sadly the Darwin Awards weren't going in 1976 - he'd have been a front runner in the At-Risk Survivor category.

Diet drinks to die for?

MacHeath, I'll alert Clarinda. No problem using me as a messaging service at all.

Thanks for the link Stewart. Good stuff.

If I don't have a couple of large spoons of sugar in my breakfast coffee and another couple on my breakfast cereal, by mid-morning I have a severe attack of the shakes and feel faint. I once mentioned this to my GP and he said that I was in good health and there was no obvious cause, so why worry?
Hope I don't go into hospital in Wales, as by midday no doubt they would be wondering what had happened and probably treating me with some far more expensive drug!

That's why I mentioned the big pharma. Is it a ploy to make them more money? Very possibly.

There are lots of folk like you. I know someone who needs half a bar of Cadburys every day. Maybe I should confine him to a couple of spoonfuls of sugar. Much cheaper. :)

Aapartame.
http://www.mercola.com/article/aspartame/dangers.htm
The side effects seem similar ,and just as nasty as for statins.

Google it and see. Also note the name was changed a while ago to confuse the innocent.
And the medics will tell you that sugar is dangerous to your health?

Many thanks for the link Apogee. I'm waiting to see if anyone in Wales comments. It would be good to have a Welsh opinion.