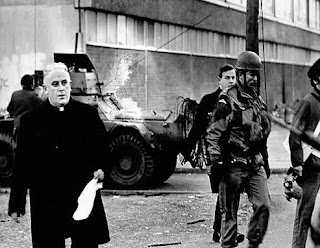 The people of Londonderry are celebrating today. The Saville inquiry has found that the 13 killings in Londonderry in January, 1972 were wholly unjustified. None of the casualties was a threat to the British forces involved.
I hope this will be closure for these families and that they feel they can move on with their lives, but I understand some want to take legal action against individual soldiers. Whilst I understand the need the killer of their nearest and dearest to prosecuted I wonder what good it will do some 38 years on.
Dare I suggest the families who are joyous today are the lucky ones in the history of the Northern Irish conflict? I admire their tenacity in ensuring the truth was eventually disclosed. However, Martin McGuiness on Channel 4 news disappointed me. He insisted he was present that day and had not carried any weapon that day, yet Lord Saville says he may well have been armed. I'm paraphrasing here but his response was, 'If I was carrying a machine gun then someone would have noticed. You can't hide a machine gun.' But Mr McGuiness, you can ensure that people stay loyal to your cause and refuse to give evidence to the contrary. That's not to say Martin McGuiness did carry arms of course.
Let us not forget this march was illegal yet thousands took part knowing that fact. Sadly, many of the killed were youngsters, innocent youngsters.
Yet I cannot be too pleased today. I remember, before Bloody Sunday (in fact 3 years before), an Army Officer arrived back at his home as usual. He was an officer who never used a gun in this conflict. His job was to ensure good communications between the nationalists and unionists.
He walked up the path to his house, which was in an army compound, after a day's work. His wife, pregnant with their first child, came out to greet him. A few seconds later he was dead, killed by a member of the IRA, and she was badly wounded. Her injuries were to her right arm and shoulder and to this day she is paralysed down her right side. As she grows older she finds it very difficult to cope with normal domestic duties. I won't go on about this because I'm too close to the incident. Her child, a daughter, survived. The IRA claimed responsibility but the killers were never found.
I mention a single incident here but let's not forget the many IRA victims, some who ended up dead with horrific injuries from knee-capping shootings or just from having a bullet put to their heads. Others survived these horrendous shootings yet lived a hellish quality of life.
For Martin McGuiness to welcome the result of the Saville inquiry is all well and good. What about the hundreds he (as deputy IRA leader) killed or maimed? He said many were imprisoned by the RUC but he forgot to mention many assailants were never found.
I do sincerely hope the most expensive inquiry in history brings some form of peace to those connected with the deaths of Bloody Sunday. My thoughts are also with those who, because they were 'on the other side' never had nearly £200m spent on finding their killers.
Peace in Northern Ireland is imperative to the stability of the country. As a Scottish independence supporter you would think I would be all for the Irish nationalists. No. I despise the IRA and their branch groups because they used arms instead of talk.
That's why I think this is just partial closure. My friend, whose daughter is now 40, has never sought a scalp. She accepted her husband belonged to the British army and had a job to do. Which was, if I could remind you, ensuring communications between the two sides. He'd never possessed or held a gun during his time there. That's why I speak about partial closure because many do still wonder, although they have managed to go forward in the lives.
Tweet
Posted by subrosa at 21:06

The fact that McGuinness and Adams are feted as 'politicians' sicken me to the bottom of my stomach.

Murdering scum, that's all they are.

Bloody Sunday should never have happened and those responsible (not necessarily those who fired) should have been court martialled at the time. There is no equivalence; the British Army is supposed to adhere to laws and values that terrorists flout. I am angry that Saville made no comment on the Widgery whitewash...impossible that the establishment would have been so deceived by lying squaddies. Also angry that no parallel is drawn between that atrocity and the expediency of life and values in more recent campaigns...Fallujah for one, where something very similar happened under US occupation, and where Blair later sent the Black Watch.

Agreed Rab, and as they will not swear alliegance to the Queen, and therefore cannot sit in parliament they should not recieve offices, expenses or MP's pay or perks . In fact they should not be allowed in the country at all!!!
If their constituents want to elect them fair enough but as they do NOT represent them in Parliament they are not really MP's are they?

I lost a couple of friends in NI. We served in the same Corps. Dave Howes and Derek Wood were both good lads. Just doing their jobs.

Wiki has it here:

Their crime? They took a wrong turn and ended up in an IRA funeral. The punishment for such a mistake? They were both stripped, kicked, beaten and executed on live TV. The IRA admitted the executions in a press release.

My point? In that thirty year "conflict" there were atrocities on both sides. Shit happens.

My mates Dave and Derek are dead.

Their killers were released.

Atrocities are perpetrated in all civil wars and i'm thankful that i've never had to live through one.

The troubles in Northern Ireland might never have escalated into a civil war if the paras on duty on Blodody Sunday had done their job professionally.

I can only hope that the army has learned lessons from what happened on that day.

I cannot imagine how victims on all sides or their families or friends feel about what happened to them. I just wish them peace.

It's good this has come to an end and something everybody accepts.

As part of the peace process murderers were let out of gaol, in good faith. Let's hope there's some reciprocal decency now. Let's hope this is the end - but somehow I doubt it will be, because McGuinness and Adams have their axes to grind, and power to wield.

That's part of what I mean by partial closure Rab although I've made my point far more personal.

Most did their did their job professionally naldo. I wasn't there but from the information I do have from these days, the army were there on peacekeeping duties and not as aggressors. The reason the paras were present that day is because the IRA killed two policeman two days before the illegal march and on the very road where the shooting began.

You can't blame it all on the army, they're an easy target in this.What about RUC killings?

Nobody is a winner, except the likes of McGuinness and Adams.

Yes Jess, the initial investigation was a cover-up, rather like the Iraq inquiries.

I was tempted to mention Fallujah in the post be decided to keep it to NI matters.

I've said what I think of these two to Jess Indyan. There are McGuinnesses and Adams' everywhere.

Can understand your feelings CR. The soldier who was killed and his wife seriously injured lived next door to dear friends of mine. He hadn't gone to work that day because he'd not been feeling well and was taken to hospital in the afternoon having suffered a heart attack. He knew full well he'd have been in the gunman's sights too because both men came home from work together each day.

The only one alive now is the widow of the officer and she requires 24 hour help because now she's more or less immobile due to her injuries.

I do hope it's accepted Mrs R and that's the end. If families insist upon pressing charges against individual soldiers then it will run and run.

The only people then who will get any form of closure are lawyers.

The greater distance we get from the actual events, the greater the revisionist's opportunity for re-writing history.

A case in point is the current World Cup in SA. There is a daily mention of the evils of apartheid and the evil 'white regime', a pretense that all is sweetness and light under the 'black regime'. Nelson Mandela is feted as some kind of proponent of world peace; most people think he was in prison for being black, instead of his real crimes which included orchestrating the Church Street bombing massacre, amongst others.

In another 20 years or so, Mcguiness and Adams will be equally feted by people who are incapable of independent thought. People will think they were harassed by MI5 for being Irish, instead of the murdering terrorist filth that they are.

Justice will come one day; in this life, or the next. That is also true for any soldier who pulled the trigger on a civilian as well. Or for any who swore they saw soldiers shoot first, if they didn't.

I think we have to realise there have been mistakes on both sides. Put it to bed and move on. Recriminations will only escalate the situation. There is still plenty of anger on the Unionist/British side, but if we are not to go back to the troubles we must agree to disagree, hard though it may be.

Why did Mr. Cameron feel the need to apologise (Brownlike) on behalf of The Government? He wasn't around at the time.

There are never winners in war rikris, just some who suffer less.

I find the celebratory attitude of some, about this report, rather unsuited to the occasion EV.

Oh there will be recriminations DL. Already some have £ signs in their eyes. One chap, speaking on radio, was only a toddler when his brother was killed. Aye heads on sticks are required. Never mind about the IRA killings before this.

I don't know banned, but in some ways I admire him for doing so. At least he accepts that apologies can be necessary on occasion.

Did Brown ever apologise? I don't recall.

As everyone knows the usage of Londonderry/Derry is a political issue in NI/ROI.
For the last couple of days BBC Scotland was saying "Londonderry", but today the've switched to "Derry". I wonder why.

I noticed that too William. Hence I stuck with Londonderry.