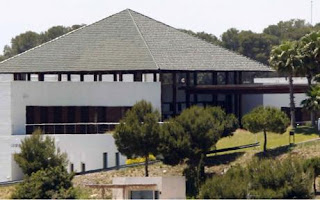 I was under the impression Mr Osborne was attending the G20 meeting in South Korea at the time of the Bilderberg meeting in Spain.

Is it a clinic they go to in order to be genetically modified? This could get interesting if it is. Any suggestions?

They're already genetically modified Demetrius. They have to be to get invited.

Their attendance is purely to have their energy cells recharged.

Strangely enough I blogged about this just yesterday; mostly about Iain Hollingshead using his Daily Telegraph piece to sneer Bilderberger 'skeptics' as Conspiracy Theorists and "loons".

Mmm BD, CA is a well researched source and I've never found their articles to have any propaganda in them.

I suspect Osborne attended at some time during the 4 days.

Oh Demetrius, I can tell you like si-fi, which of course is seldom beyond possibility.

RA, you're such a delightful cynic. :)

I read your piece banned but after I'd written this. Sorry I didn't put a link to you. My aim was just to give the list of the people who make our laws. We're in the hands of these folk IMO.

Mind you the EU doesn't come far behind.

John, I'm sure there's a novel in you. How about it or would it be too distressing to really discover how we're managed by a few 'humans'?

Forget the twelve foot tall shape shifting lizards and the 8000 year old priests of a lost civilisation, if anyone wants to understand the Bilderberg Group just read George Orwell's 1984.

They are about power and control in perpetuity.

I agree with you greenteeth. The problem is most of us don't want to believe that.

Where was Ken Clarke, he is usually at these meetings, surely he didn't consider attending Parliament of greater importance? After all he did say he is looking forward to the day when our Parliament is reduced to the status of a rate capped council.

Hello Derek, good to see you. I too thought KC would be there, but alas no. Perhaps he's had a slight change of heart.