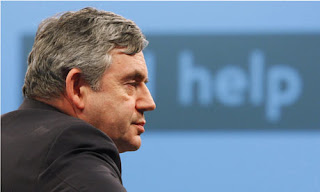 Many commentators are saying Gordon Brown will be fondly remember in the history books as a good chancellor and a Prime Minister who handled the 'global' recession effectively.
I disagree. Many of us political watchers have been saying for some time that he was introducing a 'scorched earth policy' and it would appear we were right (again).
Billions of pounds in public money was committed in the run-up to the election campaign in a deliberate strategy to boost Labour's chances at the ballot box and sabotage the next government. This week the chancellor, George Osborne, will prepares to reveal details of an initial £6 billion of cuts to help reduce the £163 billion deficit.
The 'black holes' already unearthed include a £13 billion tanker aircraft programme; £420m of school building contracts signed off by Ed Balls just weeks before the election was called; the £1.2 billion 'e-borders' IT project for the immigration service; the multi-billion pound cost of decommissioning old nuclear power plants and a £600m computer contract for the new personal pensions account scheme rushed through by Labour this year. It will still cost at least £25m even if it is cancelled.
Gerald Howarth, the new Tory minister for defence procurement, disclosed that the financial pressures on the MoD were even graver than he had been expecting. "The appetite for new programmes exceeded the capacity of the MoD's stomach, particularly in the run-up to the election," he said. "In the past few months there was a rush of new orders. What we are going to have to do is ensure the equipment programme matches the military need."
Nothing there that should surprise any of us is there and that's only the beginning. George Osborne intends to announce a freeing of spending on new IT projects, stopping most public sector recruitment and renegotiating deals with government suppliers. He has a very difficult task to sort out the mess and the pressure is on him from many areas - not least Vince Cable who wanted his job.
Transport for London, controlled by Boris Johnson, has bought out the shareholders of subway contractor Tube Lines for £310m. Mr Johnson said that the deal freed London Underground and private contractors from 'the perverse pressures of the Byzantine PPP structure."
Should Scotland manage to negotiate the right to borrow finance, I wonder if they will rid us of these exorbitant PPP and PFI contracts created by the last labour/libdem administration. It would be money well spent in the long term if the contracts cannot be renegotiated, which seems to be the case at present.
Gordon Brown's legacy for the UK will be one of not saving during the good years and spending extravagantly during the bad. I won't mention the selling of our gold, the robbery involving pensions, the loss of the 10p tax band and the billions given by DFID for projects which appear dodgy to say the least. I've no wish to be blamed for causing anyone indigestion on a Sunday morning.
source
Tweet
Posted by subrosa at 09:14

"Many commentators are saying Gordon Brown will be fondly remember(ed)"

And millions of ordinary people whose kids & grandkids will inherit his debts for a generation, will be grateful his profligacy has been halted.

Millions of people approaching retirement will never forget how their pension funds have been raided.

He was a cunt of the 1st magnitude.

Heck, that is some legacy that Brown has left us!

Fascinating that Boris Johnson felt the need to - what - deprivatise the London Underground?

I would ,like so many others, have to agree with Joe and Wisnaeme. Labour still promotes the big lie, hoping no one will look behind it.
And Milliband says they will have to investigate why people stopped voting for labour.
Does it not ,even slightly, occur to them that a scorched earth policy of wasting, not even using productively, but wasting billions of pounds of taxpayers money is a massive disincentive to vote for labour. And it also shows massive labour incompetence in running anything they touch ? Even now labour still does not get it. Will they ever, or are they selected for stupid?

Here we go again or not.


Eurosceptic MPs will renew calls for a referendum on the Lisbon Treaty when it comes up for debate again in parliament in the coming weeks.

A new amendment to the treaty - expected to be rubberstamped by EU leaders in June - will require ratification at Westminster.

The Foreign Office says it is only a technical adjustment.

But some Tories are set to use the process to call for a vote, despite David Cameron already ruling one out

Subrosa, enjoyed your blog on Brown's legacy, however, I think you are being far too kind to someone who deserves to be tried for treason for what he did to the UK during his time both as chancellor & PM, including his betrayal of our Armed Forces. I'm with Joe & Wisnaeme in terms of an accurate description of him.

I agree wih the sentiments above re Brown.

Brown was a conman, liar and a bully. He was a man who moved the goalposts and fiddled the figures to get them fit his incompetent fantasy economic forecasts.

Brown should be remembered for the shambles he has left for everyone, now, and the future generations.

Many will agree with you Joe.

Yes indeed Douglas but it was cheaper to buy it back for the long term. PPP is just a money making adventure for labour's cronies.

They're selected for stupid Apogee. Must be. Who would elect them for intelligence?

Oh Niko, I do hope they do. If Cameron does that he'll gain a great deal of confidence from many folks.

Hi Ruth. I did say I disagreed with the commentators who said he'd be fondly regarded in history.

Left it to my own readers to give their opinions as you can see. I'm with you Ruth. The man was unbelievably irresponsible in all areas not just one or two.

I suppose the scorched earth policy of buying for the military was to ensure they couldn't be accused of not spending this financial year. It will be interesting to see what Liam Fox says about the purchases.

It's the future generations who will suffer most Billy. What a disaster really when he has oil money - the only country in Europe to have oil and the one with the biggest debt and massive deficit.

This might be just the tip of the iceberg.

When Broon said he'd end 'Boom & Bust', he was at least half-right.

Oh I'm sure it is Mrs R. In the next few weeks we'll know far more and much of it will leave us speechless.

He was great at spending money - our money.

Half right, right enough Joe. Only that's not good enough - it's only half good enough.

I agree with so many comentators about your post. Even now so many Council's in Scotland are hamstrung by the debts caused by their PPP funded new school's projects, all started under New Labour administration's post 2003.

Nico, what exactly has your comment got to do with the price of cheese?

I agree with Ruth. Hingings too good fur the ersehole!

Somewhere this weekend I read he may be offered a job with some international bank DL and I can't find the link again.

Got to keep the bank balance healthy eh.

"Many commentators are saying Gordon Brown will be fondly remember in the history books as a good chancellor and a Prime Minister..."

This holds true for many ex-leaders but not all. And certainly not for Brown.

History will hardly recall or care for that brief blip on the timeline between Blair and the next big thing. Lets face it, Brown served for little more than a third of the time that John Major managed in the top job. And there's your perfect comparison; Major following the high-water Thatcher and Brown following the history making Blair. But Major did make an impact upon his time. A turbulent period that was shaped by the man and the man shaped by the moments.

Can anyone say the same of Brown?

Forget the factoids about hospitals, nurses, schools, bank rescues and "it started in America" because history will not remember any of them or at least not in a context that defines Brown. So what's left? What did our illustrious former PM actually do?

I'll guarantee you that in 20 years time, Brown will only be remembered for his walk-on (or perhaps walk-out) role in the historic Conservative/Liberal coalition of 2010. Yes, there's Brown's problem in a nutshell; Cameron (and Clegg) made a bigger historical footprint in 3 minutes than Brown managed in 3 years.

I was just quoting many commentators' writings of this past week John, but I entirely agree with you.

In fact what astonishes me is so many still insist he was one of the best chancellors of all time. Perhaps that will be revised in the next few weeks when Osborne's independent assessment is reported.

I would agree with your final paragraph. The problem is history is written by humans and is the opinion of these persons. Perhaps this past week many were just being 'kind' but why I ask.