How the whole world was tricked into

On a day in the summer of 1988 James Hansen (of GISS/NASA†), the mentor of Al Gore, gave testimony before a US Senate Hearing that dangerous global warming was almost certainly being caused by human carbon dioxide (CO2) emissions. The Hearing had been stage-managed by Al Gore. The day had been deliberately chosen as likely to be the hottest day of the year. The night before the Hearing, all the windows had been opened so that the air conditioning would not work properly. Thus everyone was sweating as Hansen made his ‘chilling’ statements. These dirty tricks were publically admitted in 2007.

This was a complete reversal of the scientific method - announcing a conclusion before observational and experimental work had been conducted. Nonetheless the AGW† hypothesis was taken by the Press and politicians to be a fact.

To achieve some semblance of plausibility, it became necessary to adjust what ‘evidence’ there was to fit the conclusion. This was the purpose of the Intergovernmental Panel on Climate Change, a non-scientific but politically motivated body. And it was through the IPCC that scientists in the UK (at the CRU at UEA†) and in the USA (GISS/NASA) colluded to generate this evidence. The leaked emails make it clear that collusion is the correct word.

To achieve an apparently ‘unprecedented’ rise in temperature since 1975 (see GISS graph below) a neat trick was used. 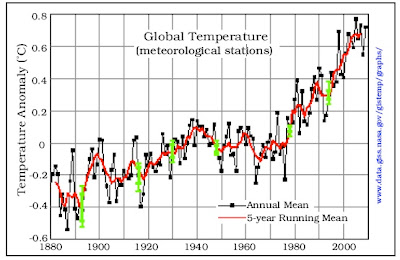 In order to show an alarming ‘anomaly’* (a nearly 1ºC rise) they cut the number of weather stations used for raw data by 70-80%, but they kept the full number to calculate the ‘starting point’ (the significance of this will become clear).

What they then refused to do was to make the details of this selection available to other scientists. Thus began a long campaign by “The Team” (activist-scientists from CRU and NASA - part of the IPCC machine) to prevent this vital disclosure. Sceptical scientists (no professional scientist can be other than sceptical - Nullius in Verba) were suspicious of the secrecy. They were reasonably certain that the modern warming was being exaggerated - but without access to the raw data sources they could not test this.

Only after vigorous efforts using the Freedom of Information Act, which were resisted at every turn by “The Team”, using every excuse in the book from ‘losing the data’ to ‘national security’ to prevent disclosure, and by the leaking of the emails, has the truth begun to emerge. It is a complicated tale of collusion, deliberate fraud and deceit, but the cull of the weather stations (shown below) crystallizes most clearly how ‘The Trick’ was performed. 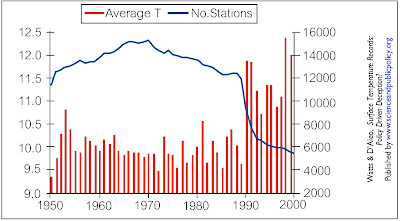 * ‘Anomaly’ is a curious word to choose: it suggests abnormality - and therefore alarm. But there is no arbitrary ‘normality’ in climate - as the history of our planet shows.

As can be seen, the sudden jump in average temperature (of nearly 1ºC) around 1990 ‘coincided’ with the dramatic cull in the number of weather stations - because the ones removed were overwhelmingly the ones in colder regions of the world and in the rural areas (generally cooler than urban areas). Thus, for example, the country of Bolivia (a mountainous country in the Andes region) was airbrushed out to be replaced by an estimated ‘average’ between the coast of Peru and the Amazon rain forest.

So should we still worry? Is the ‘science’ still ‘robust’ as politicians and activists continue to say? The answer is no and no. The ‘science’ is bust, not robust. 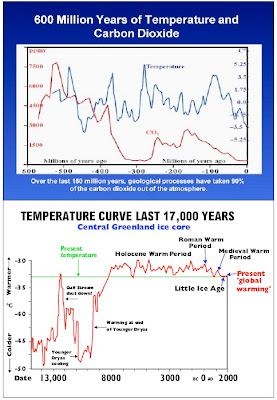 As you can see, CO2 levels today are at their lowest level for 300 million years! An increase by 40% in such low levels is of no significance except for the fact that more CO2 means more plant life and more food. CO2 is not, repeat not, a pollutant: it is a lifegiving gas.

[graph: David Archibald] This graph shows why there really is no reason to fear: mankind does not ‘cause climate warming’.

this short story - this is just a summary.

While the Earth Endures: Creation, Cosmology and Climate Change by Philip Foster,

Climategate: the CRUtape letters by Steven Mosher and Thomas Fuller, published in

(an initiator of the Copenhagen Climate Challenge, in Dec 2009)

Not this whole world at OR's place! great post.

I have no objections to looking our planet but the way this whole "global warming apocalypse" was managed is an absolute disgrace.

People should remember always, consensus of opinion is not fact, 500 years ago the consensus amongst men of learning was that the world was flat.

Glad you liked it OR. There's another to follow this week about greenhouses. You know all about them I'm sure. :)

And they're still getting away with it Sue. I now intend to refuse to pay 'green taxes' as I've had enough.

Very true, QM, very true, yet this issue is going to cost all of us a great deal of money which the few will pocket.

If AGW was so 'robust' why did Jones et al at CRU have to fiddle the figures to 'prove' it?

That's the question Joe. 'They' still haven't answered it.

Hi SR. A clear and lucid description of what was done. The graphs are the clearest and easiest to read dealing with this that I have seen.

Now, the real question ! Who is behind this "ultimate" scam of the whole planet.We have seen the foot soldiers, and a few of the captains.
But who are the generals and the Fuhrer, the ones that dreamed up this scam and put it in motion,with the intention to rip off the whole planet and put the rest of us back to the 10th century.

Do not make the mistake of thinking this is something of the last 10 years, this goes back at least 50 years to the first known data "fiddle" which would imply the plan was hatched well before that.

Which would imply a very big operation and someone able to set up an operation across generations.

And have the political and financial clout to convince the powers that be to go along with it(because of loss of face and similar persuasions).

There are precedents for this kind of tenacity in the banking business, start off with the history of the federal reserve bank, then follow the links, and your nose !

In the late 40's and early 50's, the idea of weather control was all the vogue, but no one could make it work, but, what if someone did some original thinking and saw the possibilities of frightening people into believing the original "Big lie" ?
And thats todays Science Fiction story,.... or is it?

Ah Apogee, you think along the same lines as me. Do hope Philip reads your comment.

I found his writing some of the clearest too.

You cite Chris Booker, he had an excellent piece in last Sundays Telegraph which, in part, looked at the "peer review process".

"A team of 40 researchers from 12 countries, led by a Canadian analyst Donna Laframboise, checked out every one of the 18,531 scientific sources cited in the mammoth 2007 IPCC report. Astonishingly, they found that nearly a third of them – 5,587 – were not peer-reviewed at all, but came from newspaper articles, student theses, even propaganda leaflets and press releases put out by green activists and lobby groups.

This reminds me of the arguments of my youth that smoking didn't cause cancer.Could you get a real scientist and not a theology professor. I would be interested to hear his views on evolution

Banned this is a guest article not written by me. I'm sure the writer will read your comment though.

William, please don't show your ignorance. Mr Foster is also a physicist. Didn't you note the Nat. Sci. or didn't you know what it meant?

Sorry can,t read but I would really like to know how qualified he is.

If you email me William I will give you Philip's email address. You can ask him yourself.

I'm sure you'll be pleasantly surprised by his qualifications.

I don't care what qualifications the author has, I am interested in whether what he wrote is accurate or inaccurate, true or false.

If it is true, it should not bother Mr William or anyone else whether the author has any qualifications in anything. If it is false it does not become true through the author having more certificates than I've has pork scratchings.

Well said FatBigot. William hasn't emailed me for Philip's email so I take it his remark was flippant.

I'm publishing another of Philip's posts in the morning.