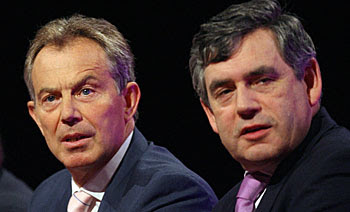 Security for these clowns might be less severe in Scotland. Their beloved homeland and a fair number of Scottish laws. So why not follow the example of the guy below and have a go at Bliar for Iraq and Brown for Afghanistan penny pinching the death of our soldiers? It is rumoured Clown Prince Bliar will be looking to sprinkle his itching powder stardust on Labours' stomp!

"A journalist tried to arrest Tony Blair for 'crimes against peace' as the former prime minister arrived to give a speech at the European Parliament in Brussels.

Mr Blair flinched as his accuser, left-wing writer David Cronin, wearing a press pass and carrying a notepad, put a hand on his wrist and told him: 'This is a citizen's arrest.'

The former leader is then said to have given would-be detainer a 'bewildered and contemptuous' stare before bodyguards pounced." http://www.dailymail.co.uk/news/article-1260045/.html#ixzz0jBLzMF3T

Do you blame him?

The bounty is over thirteen grand.

I need to find the post again but within the blogosphere are a group of individuals who are hell bent on attempting a citizens arrest on our PM during the GE campaign.

They have detailed how to do it lawfully.

Sadly though I am concerned for them. It takes some loony gun wielding SO19 headcase copper to bring a lawful act to a horrific end.

There's not doubt about it that the man deserves to rot in jail. This arrest Blair site will go some way to ensure that he is never allowed to forget that we know he's a war criminal.

I hear Rumsfeld is uncomfortable travelling. Keep up the good work!

I see it went about as well as you would imagine it to go, given the guy attempting it was a Guardian journalist!

Jings Marvo, I didn't know that!

I remember reading something about that too LotF but thought it was wishful thinking. Hope it really is.

He should never be allowed to forget Alex.

Aye Julia, that detail did bring a smile to my lips. :)

I have a cheque book open if someone can organise a legal case against Blair.

Didn't Alex Salmond and the SNp try Strathturret? I'm sure there are many thousands who would also offer financial support.

I think they sought an opinion about impeaching Blair whilst he was PM.