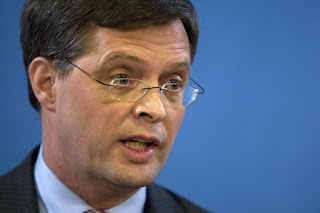 The Dutch coalition government collapsed today when the two largest parties failed to agree on whether to withdraw troops from Afghanistan as planned this year.

It's believed PM Jan Peter Balkenende telephoned Queen Beatrix, who is holidaying in Austria, and tendered his resignation.

As I reported the other day, the Labour party wants the Afghan mission to end as promised although Mr Balkenende's centre-right Christian Democrat CDA, the bigger party in the coalition, floated the idea of keeping a reduced force in place for a year past the August 2010 deadline.  The Netherlands presently have 2,000 troops based in Uruzgan province.

The Balkenende government took office three years ago.  If an election is held before the unveiling of next year's budget in September, it would effectively nullify an existing agreement to hold off any austerity steps until 2011.

Seems the Dutch are trying to ignore the obvious with delaying any attempt to bring their budget deficit under control.  Why can't governments see that postponing action on their economies is short-term foolishness.
Tweet
Posted by subrosa at 17:30

You think so John? I hadn't thought about that. It seemed as if it was labour courting the libdems to me.

60 economists disagree with you less the 20 Tory placemen.....leaves a net gain of 40 against your assertion.

You should read the article in the FT Niko.

The LDs will play it coy until they know who's won and by how much.

Then a political price will be agreed which we will all have to pay for; whether we agree with it or not.

I think the Dutch are very against further involvement in Afghanistan so the labour bunch may well have picked the right subject to cause problems.