The Invasion and A Couple of Worthwhile Reads 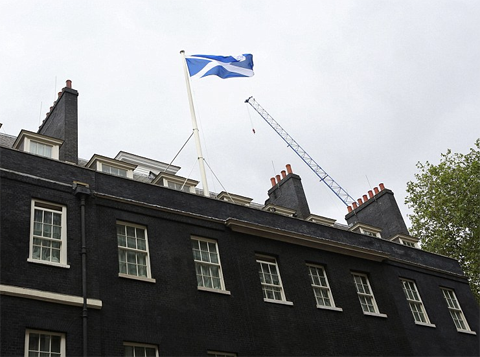 Interesting times aren’t they?  Yesterday, in a token gesture to Scotland, the Saltire was raised over 10 Downing Street.  I believe it is to stay in place until after the referendum.  How happy I am to see such benevolence from London. Do I feel patronised?  Of course not.

Yet more excitement today! We are to be blessed with a visit from David Cameron, Ed Miliband and Nick Clegg in an attempt to save us from ourselves.   I say blessed because their decision to grace us with a few hours of their time will be a good boost to the Yes Campaign.

When I first heard the news I thought ‘how condescending of them’, but later I realised Westminster politicians really are clueless about how us Scots tick.  If they did have any idea they would know that such a show of unionist unity is the last thing the No Campaign need at this moment.  But, as most people are aware, the quality of MSP from the unionist parties in Holyrood is poor, very poor, and I suppose they’ll be delighted to have their masters visit in the hope it will boost their cause.  I hae ma doots.  Be prepared for the media to be overflowing with reports about the London heir bummers’ visit to our country and don’t forget to smile at their ignorance (or should that be arrogance?)

The other day I found this very interesting ebook Scotland’s Decision published by the Hunter Foundation.

It’s lengthy but worth reading.  If you’re short of time at least read the conclusions.  Pass it to anyone who perhaps is undecided.

Also Jim, one of my readers, has suggested I republish the leading article in yesterday's Scottish Review.  Unfortunately I can do that owing to copyright rules but you can read it here.  Thanks for the prompt Jim.

As an attempt to show balance in the debate, I was sent a copy of a blog article entitled Do the Scots know what they’re doing?  You can read it here. It’s always healthy to read an outsider’s view, although it’s very obvious Mr Boot has never spent any time in Northern Britain.

The visitors are little better than used car salesmen. They are flogging a wreck of an old banger, rented from spivs in Europe. It seems independence is a shiny new model worthy of a purchase. Only time will then tell how well that vehicle will age but at least the new owners get to drive it!

Thank you OR. Couldn’t have put it better myself. x

See no evil; hear no evil; speak no evil – Cameron; Clegg and Miliband – I leave it for the reader to decide which monkey is which – and I would suggest any reference to ‘wise’ is somewhat inappropriate and very much open to debate.

Why are they, at this eleventh hour, now offering us what is effectively ‘Devo-Max’ when in their arrogance they adamantly refused to allow it on the ballot paper, despite a request from Holyrood?
Think of how different and amenable things might have been had it been included.

The country formally know as Great Britain which is now in reality The City State of Westminster’ has already seen the loss of its Empire and of its Commonwealth. It holds an unsteady truce with its near neighbours and finds her sphere of influence greatly diminished over recent years.
Now the natives to the north who inhabit Caledonia seek to free themselves from the shackles and subjugation of the City State of Westminster.
This could spell trouble as other tribes to the north-east or in Wales may seek similar freedoms. But even worse, there could arise unrest and a challenge to their leadership from within the city State.

And so for one (in)glorious day the three patriarchal patricians travel north to quell any unrest amongst the savage natives.

Like a marriage where one partner wants a divorce - my inclination is 'to let 'em go'.

But let them not expect to retain conjugal rights.

I understand you currently have Milliband, Cameron, Clegg and even Gordon Brown up there in Scotland.
You'll be needing experienced politicians if you go it alone so how about a deal whereby you keep them? You can have them really cheap if you promise not to let then come back!

What conjugal rights would we want to retain Joe? Couldn’t think of anything worse lol.

Given the inventiveness of the criminal classes how long will it take to strip an 'independent' Scotland of all its assets perfectly legally because there won't be the resources and laws in place to stop them?

It fascinates me that 'experts' keep telling us that it would be near impossible to extract the UK from a thirty year-old union with Europe yet a 300 year old-familial union can be dissolved just like that!

But this is Utopia we are talking about here! The teenager that is given their 'own' room, telephone and key! Unfortunately 'mummy and daddy' won't be around to help when things go wrong. They have other 'children'. Do we build a new data centre in Perth or Portsmouth, a ship in Glasgow or Gateshead. These used to be difficult political decisions but not for long?
Westminster is a long way from Dundee, you will be surprised how far away Edinburgh suddenly becomes, how concerned the member for Orkney is about parking on Prince's Street yet unconcerned about shop closures in Kirkwall. It's called 'going native'.