'Golf Buggies' to Afghanistan and a Secret Meeting 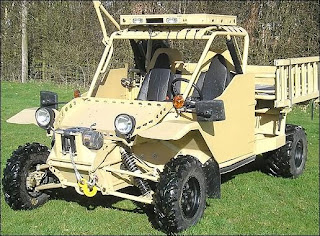 A senior Army officer called the £7 million procurement of 75 unarmoured vehicles 'a belated April Fool joke'.
The MoD have issued a contract to supply the £93,000-a-time Springers which are built around a similar frame to a golf buggy.
They are being used in Afghanistan to move combat supplies from helicopter landing sites to patrol bases. Quad bikes, costing just £20,000, had been doing the job. The Springer is designed to be used in any terrain. But they're not armoured and therefore cannot be used in areas where there may be bombs. Andrew Tyler, chief operating officer for MoD Defence Equipment and Support, claimed the contract 'demonstrates that we're continuing to invest in vehicles for the frontline'.
How anyone can substantiate tarting up a golf buggy frame and selling the result for £93,000 defeats me. The Springer was produced by Derbyshire-based Enhanced Protection Systems (EPS) and is designed specifically for rugged, desert conditions.
David Cameron has convened a secret meeting of military experts, ministers and Tory MPs at Chequers to review strategy on Afghanistan amid growing signs of division over the mission's objectives.
The meeting will be on Tuesday and also be attended by members of the new National Security Council.
Government officials stressed last night that they were not anticipating any dramatic change of policy although it is reported that there is increasing scepticism in both political and military circles over whether some of the original objectives in Afghanistan are achievable.
Denis McShane, writing in today's Observer, says it is time to end the 'blood sacrifice' of British soldiers and calls for them to be brought home.
"The White House is clearly looking for an exit strategy," the Labour MP says.
The Tory MP and former infantry officer Patrick Mercer said: "There are huge questions that need to be asked on foreign and development policy and difficult questions that need to be made in the current economic climate."
It's pleasing to see more than lip-service being paid to the war in Afghanistan by the new Westminster government.
Tweet
Posted by subrosa at 10:59

I can make and supply (for the right price of course, say..£7,500 each)Fully functioning (apart from one or two minor differences)state of the art assault rifles, made entirely from lego, these wonderful weapons in their smart colour scheme of red and white bricks are Ideal for desert use, as the plastics used in their construction are fully sand and sun resistant.

Orders of over 1000 units may attract a substantial discount and we may even run to a bribe or two in the right hands...

Come on where the safety of our troops is concerned they should only get the best!!!

I suspect a Labour crony in the contract mix somewhere, Subrosa. Always follow the money!

If this is not an April fool joke, just how do the numpties who ordered the overgrown lawn mowers ever get a job.

Looks a bit like the old Mini Moke that was designed for military use and failed in that mode even in its four wheel drive version so how can this be any better.

I made one of those in 1963 with the first Mechano set i got at Christmas, it looks exactly like it.

Heres what the squaddies think on ARSSE.....http://tinyurl.com/3yn5l8r

Posted: Sat May 22, 2010 10:34 pm
Author: meridian
Out of interest, why were ATMP withdrawn when they are still available from the manufacturer and therefore not obsolete

We have a need to move pallets of stores from a HLS to other location a short distance away
This isnt a new requirement because the big tached people have been doing it for years
We have a vehicle already in service that does exactly this, even with a dedicated trailer that lifts pallets
That vehicle is still available from the manufacturer
The user is happy with the existing vehicle
This existing vehicle is certified for internal air carriage etc
We withdraw said vehicles and dispose of them at bargain basement prices
Spend £7.5m on new vehicles to do exactly the same job
The vehicles are bought from a company that makes helmets and goggles but has an ex REME director
We tell the world and his dog how bloody brilliant the new vehicles are
The new vehicle has a paper spec worse than the ones we have flogged off
Months later, only 27 of the 75 are in theatre
The ones that are in theatre aren't the ones we actually trialled
19 are so knackered they are beyond local repair

The MOD sell of hundreds of obselete Landrovers every month at rock bottom prices. Can any one see the double irony. All they want from this springer is to act as a mule carrying Q stores from aircraft etc. Landrovers live forever if treated correctly, and do not ever cost £90k +. Another bloody scandal.

Even using all new parts, you would be very hard pushed to justify 9 grand including a 2 grand profit per unit . 93 grand each! There should be an investigation into every aspect of this contract, including the competency of every person involved in the drawing up of the specification, the issuance of same,the issue of the tender and the vehicle fitness for purpose,also the abilities of the accountants who signed this off as value for money. Finally an investigation for fair pricing of the product.
Why do most MoD projects cost 10 times what they should, perhaps this government should initiate an investigation into this , an investigation to get answers, one with real fangs to get to the truth , not a white wash fairy story!

The mind boggles indeed Indyan. Never mind it's only our money they're spending on this rubbish. Wonder what the folk at the front line really think.

Of course OR, I should do. Couldn't find out much about the manufacturers but you'll be right.

Have you ever been in the MoD in Whitehall Dubbie? It's just full of anonymous people who seem to have the right to spend our money.

KBW, thanks for the link to ARSSE. I should have looked there before I posted this.

It is a scandal KBW yet little has been said in the press about it.

Apogee, I may just write to my MP asking him to look into the cost of these. See if he does anything.

Ha, Ha, ha, you couldn't make it up. My old in laws bren gun carrier (universal carrier) had at least some protection and he mumped about how little it was when up against Hirohito's finest in Burma - never mind that taliban with high powered rifles and machine guns

There should be some form of investigation about spending this amount of money Dram, especially when the young ones earn so little.